The first inflation bill has officially passed. While we wait for the government to burn through this first round of money, we can now watch the Fed's next move. What I would expect next is both "liquidity injections" and even additional rate cuts.

I would not be surprised to see a synchronized worldwide rate cut from all the central banks. I have been talking about the Fed's money printing all month and the final numbers have been released. Brace yourself. The chart below shows the Fed's balance sheet. It increased from $900 Billion to $1.5 Trillion in a SINGLE MONTH. 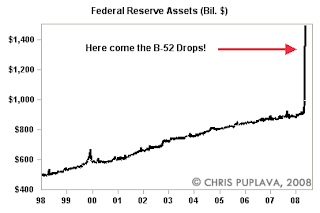 The next chart shows the percentage increase to the Fed's balance sheet in comparison to previous increases from Greenspan. Incredible. 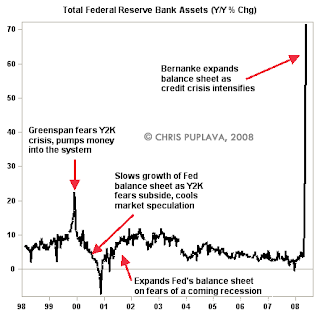 The United States government and the Treasury have declared war on our currency. They received a call from California this weekend asking them for $9 Billion because the state is broke and no one will buy their bonds. This is just the first state, there will be more. They will all be rescued. The auto companies will be rescued, the airlines will be rescued, and the American public will be rescued. If the stock market starts to fall the Fed will probably start to buy stocks. Does that seem absurd? There is already a program in place to do this. If home prices continue to fall they will start to buy empty homes.

Unfortunately, those dollars will have no value.