The dollar index has officially gone parabolic to the upside. Since the middle of July its rise upward has been breathtaking. 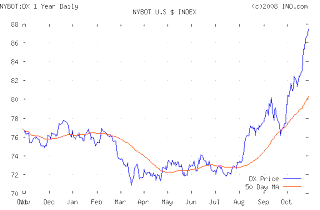 It reminds of a movie when someone you think is finally dead all the sudden rises up for one last great moment before their spectacular death. Look at that chart, incredible. When will the dollar stop rising? Who knows.

Investors right now are running scared and their natural instinct is to run toward the United States currency, specifically short term US treasury bonds. No one has told them that the reason we are having all of the problems right now is because of the United States. It is similar to a bomb going off and people running toward the fire. Many investors who were sitting in the frying pan have now jumped out and are sitting in the flames.

Every day the dollar rises should be a day to cheer. It provides one last great opportunity to get out of the currency for some lucky investor, giving them the opportunity to buy a new asset at a better value. It is similar to someone buying your home right now. You don't ask them why they are buying it. You don't ask them if they've turned on the news or if they know they're about to lose a lot of money. You just graciously except that they have taken that burden off your hands.

That's what has happened recently. Commodities and foreign stocks (especially foreign currencies) are priced right now at fire sale prices. If you were to go back to mid July and write down on a piece of paper the worst possible thing our leaders could have done for our currency, I don't think you could have even imagined it to be this bad. And we're just getting warmed up.

What we're experiencing right now is an anomaly in financial history. In 1999 people bought Pets.com for $200 a share with the company having no possible way of earning money. In 2006 people bought 6 condos at a time in Miami with no money down, expecting to retire off their profits. Around those times people start to think, maybe it's different this time. Maybe if the Fed prints trillions of dollars, the government nationalizes all the banks that are insolvent, and runs a $2 Trillion dollar deficit this year.....Then maybe that is bullish for our currency.

Cheer every rise in the dollar. That means there are people willing to overpay for your currency right now. Cheer someone who would be willing to buy your home. Cheer every fall in gold, oil, agriculture, and the Australian dollar. The people buying the fire sale assets now are the ones that are going to have a story to tell in a few years. People are going to look back and wonder how someone could buy a 10 year treasury bond yielding 3.87%, and not buy a Canadian oil company yielding 13%. They'll look at it as clearly as we look now at Pets.com.