The Rosy Picture is Gloomy

We received the the unemployment numbers this morning that said that we are currently running at 6.5% unemployment and have now lost over 1 million jobs this year in America. What was shocking to me was how incredibly understated these numbers still are. Just like the Consumer Price Index that measures inflation, the unemployment numbers have been changed over the years to represent a much rosier picture. This is not some conspiracy theory, they have come out and told us how they have changed their calculations.

I have discussed the way they do this a few times in previous Tuna's so I'll just give you a glimpse here of where we really are. John Williams of shadow stats compiles economic information the way our government USED to, using real data. The following chart shows true current unemployment in our country. Click below:

The top line shows where we are currently running through the end of September at around 14.5%. The number will be higher when he releases the October information. Anyone who lives in the real world knows that this is the true number, and it is only a matter of time before the country stops paying attention to the government's phony information.

I came across another very interesting chart yesterday. Click below: 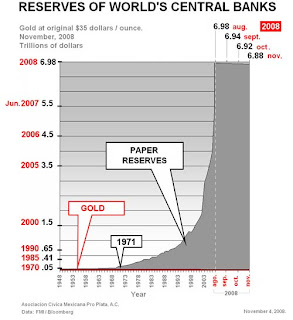 It shows the reserves of foreign central banks. Just about every week I have talked about the US economic bubble ending when foreigners stop purchasing our worthless debt. As you can see from about 1971 their accumulation of our debt has increased exponentially month after month. To many people this means that it would go on forever.

Something interesting happened in August of this year. The amount purchased hit a wall and has actually started falling month over month since. Could this mean they have finally figured out our con? That they work hard every month to send us money that we use to buy things?

Maybe. Maybe not. But if they have, that means we will then move to step two of this process, which is monetizing the debt. If foreign countries will not finance our lifestyle then we will have to do it ourselves with printed money. Recent charts I have posted show the Fed's balance sheet exploding upward.

There are two important factors to remember concerning inflation. The first is the supply of currency (dollars) printed into the system. I talk about this relentlessly, but what I talk less about is the demand for those dollars which is equally as important. For example the recent rise in the dollar index has come at a time when dollars are entering the system at a blistering pace. But because of the recent deleveraging, there has been a short term rush toward dollars increasing demand tremendously.

What will eventually happen is that when the foreign countries stop buying our debt, which may be happening right now, the demand for dollars will fall through the floor. This will come at a time when the Fed is monetizing our debt, meaning they are covering all the bad loans with printed money. They will be flooding our system with dollars at the same time foreigners are sending all their dollar reserves back to America. Supply exploding, Demand collapsing.

These steps will combine with the third and final step. Americans are currently saving money because of the economic hardship. (A good thing) When they begin to feel the value of that currency falling, they will begin to purchase items faster because they feel the items will rise in price if they wait. This will flood the market with additional currency creating the final leg of the perfect storm.

I use the term hyperinflation a lot, and these are the steps that will unfold to get us there. The dominoes have been put into place. All it is going to take is a small push to start the process.