During the summer of 2004, I entered the real estate business to start a new career. I was coming out of school at the time and had no idea what I wanted to do with my life, a feeling I think most people feel these days as they left school.

I decided to go to work for a home building company and sell homes. I spent the morning every day before work reading about my business and reading about my market in general. At the time we were entering the final stage of what ended up being the greatest real estate bubble in the history of our planet.

The headlines, however, talked nothing about a bubble. They talked about the money that people were making purchasing their new homes. People out in California who were buying an averaged price home of $500,000 at the time could expect a 30% return on their home the next year based on the previous year's performances. That meant their home was going to make $150,000. Why would they stay at their jobs? They were homeowners.

It was the only real estate market that I had known so I thought that was the way it would always be. The media felt that way. They said it was due to population growth and the strength of our economy.

I think about what kids coming out of school think when they read the papers today. A major headline in the financial times this morning read, "Interest rates on US treasury bills turn negative." Negative? That seems odd, they must think. Why would someone lend our government money, and pay the government while they hold it?

The media explains it will a familiar clarity. Investors are rushing to "safety." Many kids coming out of school might even think it is a good idea to buy bonds right now. Hopefully, something will not feel right and they might hold off, just as I decided to hold off on purchasing a home in California and quitting my job back in 2004.

The following is a long term chart of the 10 year treasury: (Click on chart) 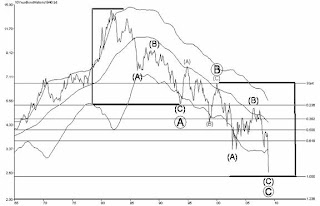 We are approaching the end of a 25 year bull market for treasuries, and in my view have reached the euphoria stage. (The line dropping straight down at the end means bond yields are falling and their prices are rising)

What a treasury bond represents is the government's promise to pay you US currency in the future. What if you thought our currency would have much less value in the future? Well, the first thing you could do would be to sell your bonds to protect yourself. If you wanted to get aggressive, you could even short treasuries. This would be the equivalent of shorting subprime debt in 2006 if you thought it was overvalued at the time.

We'll see what happens. They said house prices could go up forever, maybe bond prices actually can. If this market begins to crack, you better look out below. A lot of people listening to their financial advisers may lose a lot of money. That money may then be transfered into the hands of those shorting the market, just like with housing.