I had said on Monday that the Fed would bring us to 0% by the first quarter of next year. Well, you don't have to wait because they took us there yesterday.

As shocking as that was, the bigger story was the statement released by the Fed on their future actions now that we are at zero. They have announced a new form of monetary policy known as "quantitative easing." I mentioned that this would be their next step about two weeks ago, but once again they have had the audacity to come out and tell everyone their intentions.

In simple terms, they said they will be printing money and buying everything:

The most interesting in their Christmas purchase list is treasuries. They are purchasing mortgage securities in an effort to lower interest rates on mortgage lending and spur the housing market. But Treasury yields are already incredibly low? Why do they need to purchase them?

We have reached the long awaited moment when our Fed chairman is literally dumping money from helicopters. This is the most bearish possible scenario for our currency and our treasury bonds. The Fed chairman knows that we are moving closer to the point of foreigners cutting back on their purchase of our bonds. At that moment it will be the Fed alone that must stand ready to purchase our debt.

As mentioned before, if foreigners begin to diversify out of US debt that debt (money) will begin to flood back onto our shores. In combination with this flood the Fed will be hitting the country with a never ending tropical storm of dollars entering the system in the form of quantitative easing. The third storm of liquidity will come from banks who will have once again begun lending with their fresh cash the Fed has given them in exchange for their toxic debt.

All these will increase the supply of money in the system, but there is another factor just as important in the dollar's fall; demand. As seen over the past few months, the demand for dollars during the credit crisis has been voracious. This has caused an artificial rally during the current deleveraging and unwinding of the yen and dollar carry trades. However, over the past 5 trading days we've seen a change of heart in the demand for our currency, and the dollar index has dropped precipitously. (Click on chart below to see recent decline) 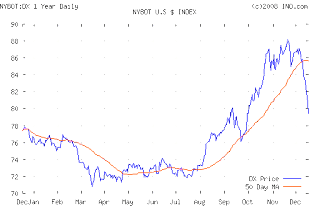 As the demand for dollars continues to fall, it will increase the velocity of money. This means the speed people will try to dump dollars and receive something of value in return. It will start outside our borders, but as the cost of living begins to rise rapidly here in America people will begin to buy things early in anticipation of it being much more expensive if they wait. This has the effect of intensifying the inflation.

The Feds unrelenting actions mean pretty scary times ahead for our country. We are on the verge of the greatest transfer of wealth in human history, a game of musical chairs with the last man holding the US currency out of luck. Unfortunately, that will be the American public who doesn't even know a game is being played right now with their money.