The Circle of Wealth

There are some big dollar numbers being moved around right now in the quest to save our banks. So what is really going on? Let's take a simple look at what just happened in our banking sector.

Over the past 8 years, America's investment banks made a lot of money loading up on toxic debt. The more debt they added to their balance sheet, the more fees they collected. This was not enough for them, however, so they created another market called the derivatives market. This market is unregulated and exists as a gambling type atmosphere where money was bet on how markets would move. The more money in this off balance sheet market, the more fees the investment banks collected.

Then everything fell apart. The losses on their balance sheets have been staggering and without government support every major financial institution in this country would currently be bankrupt. The derivatives market would have exploded, and we would be living in a world where money would be given to strong businesses or to people that could afford to pay it back. That scenario made no sense to our leaders, so let's look at what did take place.

Over the past four months these major investment banks have received hundreds of billions of dollars in bailout money from the Federal Reserve and the government. The intention of the bailouts has been to unfreeze the credit markets and get banks lending again.

Here's how the money was created: The treasury created money by selling treasury bonds and depositing that money at the Federal Reserve. (A treasury bond is a debt that our country must pay back in the future. A sacrifice that must be made down the road, with interest.)

The Fed then gave this money to the investment banks to help them handle the write downs taken on their toxic assets. What did the banks do with the money they were given?

Do you see the Circle of Wealth paid for by the American people?

The following chart shows the money borrowed/printed and given to the banks who have then hoarded the cash. (Click below) 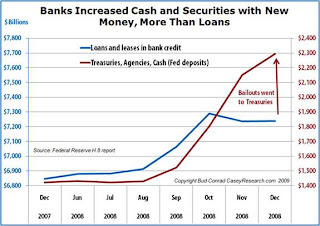 So what is the result of this money shuffle? The treasury (the taxpayer) now has hundreds of billions in new debt, the Federal Reserve now has a balance sheet full of toxic debt, and the insolvent banks have enough cash to keep them alive for a few more weeks. (A similar formula is taking place with the auto companies, and soon to be taking place with California)

None of this cash helps the American public. They did not get any of the profits during the boom years, and they are now paying for the losses during the bust. The losses will be paid by increased taxes or through inflation. Both take money from the public.

Businesses understand what is happening right now, and the more intelligent ones are looking around wondering why they do business in America. Along with these businesses, many Americans are starting to look around and wonder why they are holding American dollars. This can be seen clearly in the surge of the price of gold and silver over the past month.

This trend will continue to gain momentum throughout the year as our leaders attempt to rape, pillage, and plunder the value of our currency. I think at some point during 2009 we will see the very first of the American public begin to enter the gold and silver market. This will mark the beginning of the optimism stage of this long term secular bull market, which will create the greatest transfer of wealth in human history.

While there will continue to be massive pullbacks along the way, the very wealthy around the world are taking their positions in the metals. They will wait for the public to come in as herd at the very end of the bull market as they have time and time again throughout history.