The real estate market seems to be in a calm state right now. There were strong numbers this month showing an increase in both new homes sold and existing homes sold. With these numbers announced the chorus has once again entered in that we have reached the bottom in the real estate market.

Most of the subprime toxic loans issued in the earlier part of this decade have reset and exploded. We are currently in a period where the monthly resets have fallen dramatically. Does that mean they are finished? Take a look at this graph below: 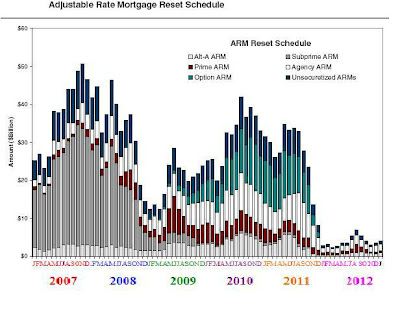 As you can see we are currently located in the eye of the storm. The next wave to hit us is going to be larger, and its going to be far more devastating. It will take place from the end of this year throughout the end of 2011. The new storm will take a different look, however, in that the bulk of the loans will be option arm loans adjusting.

As I've discussed previously, these are the loans that allowed borrowers to decide on a range of options in making their payments every month:

1. Principle and Interest
2. Interest Only
3. Less than full interest

The last option adds to the total principle amount owed every month putting homeowners deeper and deeper in debt. Not surprisingly, most borrowers continue to choose to pay this option.

During this second wave of home mortgage resets we will also be faced with a new enemy: the commercial real estate loans. They will start to reset about the same time later this year and will continue on through 2012. It is estimated that this is another $1.2 trillion problem approaching the banking system. My estimate is much higher, due to the fact that commercial real estate is tied directly to the office and retail market which is directly tied to the strength of the economy.

As businesses close their doors in both office and retail buildings this will increase the vacancy. Commercial loans are given on the income buildings produce, which is much different than residential loans. Without new leases these buildings are going to be impossible to refinance.

Coming down the tracks is the continuing failure of credit card, auto, and student loan securities. The Fed's new TALF program is designed to purchase all these forms of assets.

Richard Duncan, author of The Dollar Crisis and former employee of the IMF and World Bank, recently said that he believes it will ultimately take $15 to $20 trillion printed from the Fed in order to keep the bubble economy afloat. He estimates based on the new ocean of defaults approaching that it will be in the manner of around $6 trillion per year over the next three years.

As seen in the graph above, we currently rest in the eye of the storm. Buckle up, because the bail out headlines you've read so far are the tip of the ice burg. 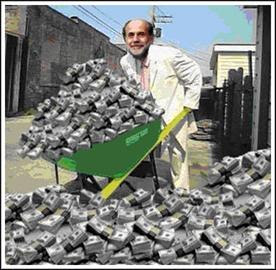