The Greatest Investment The World Has Ever Seen

***I am not a financial advisor. Please consult with one before making investment decisions***

Lets talk about something fun.

There is a very interesting development taking place right now in the world.

In 2006 an Exchange Traded Fund (ETF) created a new and easy way for the world to purchase silver. The fund is called SLV and its purpose has been to track the price of silver directly. It does this by buying and storing physical silver as people buy the stock.

As of Friday, April 9, SLV reports to hold 270,484,574 ounces of silver. It has recently surpassed its original storage agreement with J.P. Morgan and is currently looking for another place to hold the new metal as it is purchased.

What this means is that business is currently very good. Beyond what anyone had expected when they introduced the fund back in 2006.

The pink line in the chart below shows the accumulation of metal by SLV over the past 12 months. The growth has been breathtaking as new investors have poured into the market. 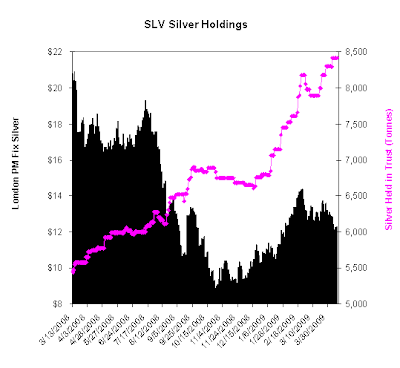 The black line shows the price of silver over the past 12 months. As you can see, ironically, it has had a much different journey. We'll get to that in a second.

The consensus estimate from experts around the world is that we now have only four years of remaining above ground silver supply. This is the lowest for any major commodity in the world.

Right now the new supply of silver coming on to the market is projected to fall tremendously over the coming years. This is a combination of new mines cutting back production drastically. This is due to limited access to new credit for growth, silver prices falling, and the global view that we are entering the dark ages permanently.

Silver is one of the most widely used industrial metals. It is used in electronics, appliances, wiring, and all sorts of goods that will continue to explode in demand in Asia, Brazil, India, and Russia over the next ten years.

It wears another hat as a precious metal, something investors turn to in times of uncertainty and inflation. This demand, seen in the SLV growth, has far outpaced the decline in industrial use from the short term global slow down. As governments around the world print money into oblivion, more and more people are migrating toward the metals for safety.

So the obvious question is? Why has the price been falling?

Looking at the chart above you seen that price of silver fell off a cliff and has stayed low since the middle of July last year. This is in the face of silver shortages around the world, and the spectacular growth in the SLV.

The reason for this is because the silver spot price is measured on something called the COMEX, the Chicago Mercantile Exchange. Large institutions have the ability to "short" this market. Let me explain what shorting means with an easy example:

No problem right? Well, here's what happened in July of last year: 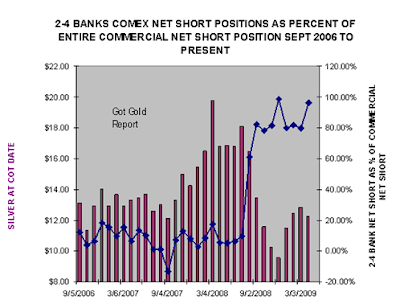 In July of last year these two banks increased their short position by an amount never seen before in the history of commodity trading. As of last Tuesday, April 7th, these two banks held 28,492 contracts of silver short. This is 96% of all silver being shorted right now on the COMEX, and it is being done by two banks.

This position taken in July caused the price to collapse over the summer and has artificially held it down since. Remember, as I just discussed, when you short something, at some point in the future you have to buy it back.

What the public does not yet realize is that there is much, much, more silver being shorted today than exists on the COMEX available to buy back.

There is something very good that has come from the artificial manipulation. Right now the world prices an ounce of silver based on COMEX pricing, meaning you can purchase your silver today at these artificially suppressed prices. (It is getting tougher to do this with physical metal you want to keep at home because sellers are demanding a premium. I have that daily premium price in the collumn to the left. You can click on gold or silver to see what it is selling for in the free market without manipulation)

Think of a beach ball being pushed down under the water. When they are forced to let go.........well, there is no upside price target I consider too high.