Our government this year has projected to run a $2 trillion budget deficit. I estimate that this number will be closer to $2.5 to $3 trillion when the finals numbers come in. There are two reasons for this:

This is what our government does by selling treasury bonds. Do you see that running clock on the top left of the page? That is the total amount of money we owe on our credit card, with interest.

It is projected that a best case scenario would be for foreign countries to purchase about $500 billion in treasury bonds this year. Estimating that the total annual deficit will be $2.5 trillion, that leaves $2 trillion in debt that needs to be purchased by investors in America.

I would estimate that pension funds, financial institutions, etc, in an absolute best case scenario will purchase an additional $500 to $1 trillion in bonds. So that leaves us with:

$1 trillion in bonds that need to be purchased (best case scenario). Now if it were a person, a company, a state, or another country they would have to declare bankruptcy. They would essentially default on their debt.

However, we have a magic tool that is called a printing press. Our Federal Reserve is going to print the remaining $1 trillion and buy the remaining treasury bonds.

There is one catch. When an investor gives the government $100,000 to borrow for ten years, they are concerned what the value of that $100,000 will be when they get their money back after those ten years. If the dollar loses 20% of its value over that period, in ten years their $100,000 will be worth $80,000 in purchasing power: what they can buy at the store with the money.

Additional supply of new currency (from the printing press) will lower the value of our currency. Think of it like 200 new homes in your neighborhood going into foreclosure (supply) and the banks all trying to sell them at the same time.

This puts the bond market in a tough spot. The Fed wants to buy bonds in order to keep interest rates low, however, the more bonds they buy with printed money the less attractive bonds become to investors because of the currency risk. 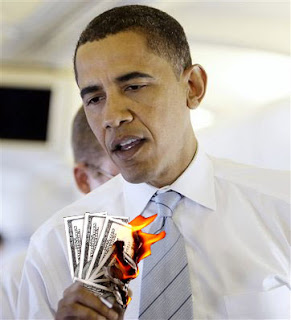 Basically, we are on a collision course with disaster. The United States will never actually "default" on its debt because it can print an unlimited amount of money. The money paid back to our creditors will eventually lose most of its value, so it will pay its debt through inflation.

Foreign countries such as China are already taking steps to diversify out of American bonds and the US currency because they understand this is happening. Their leaders have expressed increasing disgust in our administration's reckless spending.

We are moving toward the point where foreign countries will become net sellers of the treasury bonds they currently hold. This additional supply will combine with Obama's endless annual multi-trillion deficits. There will be only one buyer left to purchase the debt: the Federal Reserve.

This could happen slowly over time, or an event could trigger foreign selling one night overseas while we sleep.