Things out in California are starting to get interesting. The state is currently in a budget crisis with a $26 billion deficit this year. The Federal government thus far has stood tough, knowing that with any wiff of financial relief the state will not make the tough decisions needed to balance the budget.

There are two looming problems with letting them fail. The first is that California is the 8th largest economy in the world, it is a monster. The government could care less about the people that live there or the people that own the California debt, however, if they default on their debt it is going to cause turmoil in the financial system. 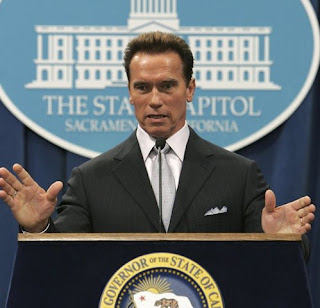 And that would mean problems for their beloved banks. California debt default would trigger insurance payments that would need to be paid out in both the real world and the off balance sheet derivative world.

So have no fear debt holders, you will be paid in full, because Obama loves you.

The size of the bill, however, may be higher than people expect. The Californian economy is not in a recession, it is in free fall. Have you been reading in the news (or here) about the oncoming second wave of mortgage resets from the Alt-A loans? The wave that will be even bigger than subprime?

That means that the taxes on those homes, income to the state, is going to evaporate. As house prices crumble, the state continues to issue I.O.U.'s, and they raise taxes through the roof to try and balance the budget, businesses and people are going to flee the state. This will have the effect of driving income down even further.

Ironically, this same thing is going to happen to the country as a whole over the next few years. Hopefully the rest of the country is watching the show on television and has their popcorn ready, because Cali's problems will spread like a virus to a town near you, if it has not arrived already.