Here's an update on the Gold and Silver long term secular bull markets that began in 2001. The charts show each metal's performance in some the world's major currencies. The US dollar is shown in column one. 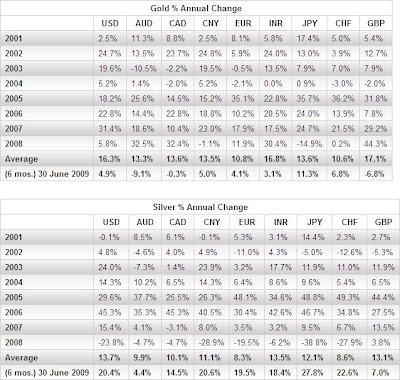 The chart shows that the best investment strategy with the metals is to dollar cost average into the market every month. Do not pay attention to the hourly, daily, or monthly price.

It is also important to remember that we have not even begun the optimism stage when the public first begins to enter the market. I have continuously stated over the past two years that I believe we will reach that point sometime in 2010.

At some point the bull market will end in a speculative euphoria when the masses will enter as a herd. The most difficult part will be a few years from now when you have to decide when to sell. Right now is the easy part. Concentrate on the number of ounces of gold and silver you own. If the prices fall, that is wonderful, as it allows you to accumulate more.