The Recession Is Over

Dennis Kneale, who is a lead anchor on CNBC and has his own television shown, announced to the world this week that the recession is now over. He announced that we will look back 12 months from now to realize that this is the exact bottom and the country will begin a major new growth period from here.

He is not alone. Countless commentators on television, online, and in the papers have pronounced the end to this downturn. The vast majority of these people make their living based on the American public buying stocks from them for fees. They feed their children on the hope that America will believe it is time to buy stocks.

Unfortunately, reality is telling a different story. Bloomberg reported last week that insiders, corporate heads and CEO's, are selling their personal stock at the highest pace in years. What could these people possibly know....these people that are actually running the companies? (Article to the left titled "Insiders Selling.")

The truth is that our economic downturn has not even begun. What we have seen is the overture for the real show that is on its way. I could create a list for days, but here are some of the more important reasons:

- Housing continues to turn down on all fronts and many indicators show that we are closer to the peak in housing prices than the bottom.

- Unemployment continues to climb at an astonishing rate. This numbers released this morning were a surprise to the downside.

- Bank's balance sheets continue to crumble across the board as the debt based economy deteriorates.

- Our economy that is based on consumption now has a new motto: "Save your money and pay off debts." This is already having devastating impacts across the board.

Over the past 30 plus years we have built an economy based on consumers and businesses borrowing money to spend. In October of 2007 we reached maximum capacity for debt. Most homes and businesses had borrowed not only enough for themselves, but enough for a few generations to pay off.

However, since that point we have had two new entities enter the market to fill the void. The Federal Government and the Federal Reserve. If it is not possible for the American public to borrow any more money and spend, then they have promised to do it for us.

This has become clear with Obama's announcement of a $2 trillion deficit this year, and as it turns out that was only the warm up. He has now cleared the way for two new monsters that are currently moving through the administration for approval:

At a time when we can least afford them, they are moving forward with full force. The harm they will do on our country is staggering. (For an in depth article on these two bills clink on the article to the left titled "cap and tax")

This movement toward Government and Federal Reserve spending means that our total money supply continues to grow uninterrupted. The chart below shows the total expansion of the money supply moving toward unsustainable levels: 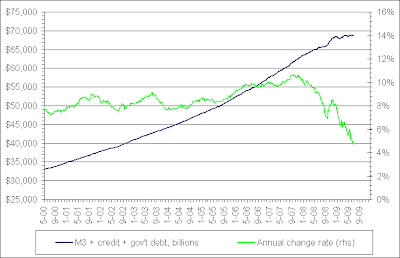 The US dollar now stands alone to carry this burden, lets hope he has the strength of mighty Atlas.

The following is a documentary that may help to understand what is happening to our country: