Back in 2002 and 2003 our country was coming out of a recession. It was a recession brought on by the bursting of our bubble stock market, the dot.com bust.

During 2002 and 2003 the prices of many goods and services fell considerably. However, the money supply was growing at an exponential rate during this period.

So the question is, if the price of many goods and services was falling, was there deflation during 2002 and 2003? No, there was disinflation.

When inflation is created it can go two places: Assets or the real Economy. During the previous two decades inflation has found a home in the stock market and then the real estate market. Assets. This is the good kind of inflation. The kind that everyone loves.

The second place inflation can go is into the economy. This means it goes into the price of real goods such as wages, services, food, energy, etc. This is the bad type of inflation. This punishes the working middle class and the poor because wages are the last price to rise during an inflation. The poor have fixed income in the form of social security, pensions, etc., meaning they suffer the most during an inflation.

So, there are two questions to ask when we understand this simple concept.

1. Is the money supply currently increasing or decreasing? 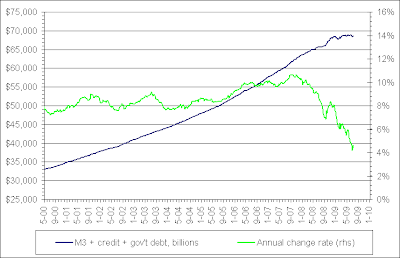 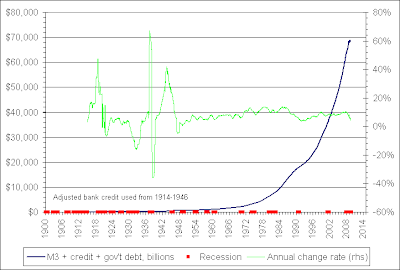 During this period there have been many periods when prices have fallen due to exogenous shocks to the economy, such as the massive one we felt last fall.

Now that we understand that the money supply has not stopped growing. The second question is just as important:

2. Where will the money go?

The dirty little secret that the Fed won't tell you is that they can create an endless amount of new money, however, it is very difficult for them to control where that money will end up finding a home. It is like a stream of water making its way between the rocks.

However, a study of history can help investors understand where that money is most likely to go. Since we have just come off one of the greatest stock market bubble (2000) and real estate bubble explosions (2006), it is very, very unlikely that one of those bubbles will be reflated.

That leaves the real economy. If you believe this is the case then you should be invested in assets such as food, energy, natural resources, water, gold, and TIPS. (Inflation protected bonds) These assets perform the best during inflationary periods where money is entering the real economy. (Such as during the 1970's)

However, if you believe that we are in a deflation, then you want to be invested in cash and bonds. (Or be short the stock market) These investments perform the best during a deflation.

Or you can go with option number three, betting that Obama and Bernanke will be able to blow up another stock market and real estate bubble.

My money is betting against them, but it will be a show to sit back and watch them try.