The World Is Full

The following chart is fascinating. They say that a picture is worth a thousand words, and in this case they are right: 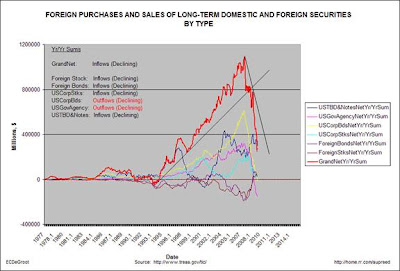 What the chart shows is the sum total of foreign purchases of all types of US debt. (red line) As you can see from the chart the appetite for US debt beginning around 1990 through 2007 was voracious and grew at an incredible pace every year.

This allowed the US to go on the biggest borrowing spree in world history over that 17 year span. It did not matter who was doing the borrowing: the government, businesses, or even every day people. If you wanted something, anything, the foreign countries were ready to lend their money for it.

However, things have recently changed as you can see by the chart. At a time when our economy (which is now completely addicted and dependent on foreign debt) needs another shot of heroine, the foreign lenders are walking away. In fact, the lending is free falling off a cliff.

This week the great Warren Buffett took the time to write an editorial in the NY Times. His focus was toward the reckless spending of our government and the disastrous effects it will have on our currency.

He wrote the article before the Obama administration surprisingly leaked their budget projections for the next 9 years on a Friday night. They have upped their projection $2 trillion for a total deficit of $9 trillion from 2010 - 2019.. That will bring the running clock to the left to $20 trillion that we will be in the red before the year 2020.

This does not factor in off balance sheet deficit spending in the form of wars, social security, and medicare. These costs will be mammoth as the social security program will need a government bail out within the next three years. Medicare is in far worse shape.

Looking at the chart above, you can clearly see that foreigners are running away from every form of United States debt as fast as possible. The new major powers of the world have now openly admitted that they plan on diversifying away from dollars as quickly as possible. 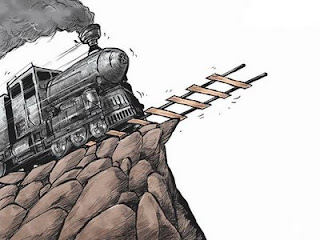 If this is the case, how will the government sell $9 trillion in debt over the next 9 years? Who will buy it?

Instead of drastically cutting government spending and refocusing our country toward savings and production, we are moving in exactly the opposite direction. The government spending is growing exponentially with new programs focused on Obamacare and Cap and Tax. They are creating programs called cash for clunkers, buying home mortgages, buying credit card debt, and are giving away money at 0% interest to force feed Americans to borrow and spend.

As I have stated repeatedly over the past 12 months, this crisis will move in three parts:

We have now moved out of the financial crisis with the government's nationalization of all losses in the banking sector. They are doing everything they can now to stop the current economic crisis with unimaginable government spending and stimulus programs.

Their actions will bring the grand finale: The Currency Crisis.

The is the nightmare scenario. When it begins they will be powerless to stop it, and we can finally begin our path down the road toward true economic annihilation.