Lets begin with housing this weekend as we've officially begun phase two of the residential real estate meltdown. The following is the chart showing resets for option-A loans: 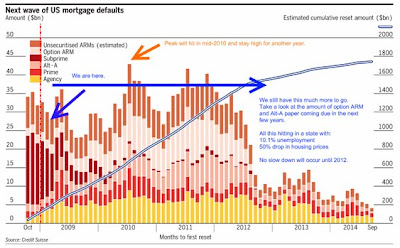 The resets will peak in the middle of 2010 and stay high through all of 2012. The foreclosures continue to pour onto the banks balance sheets, and the banks are doing everything in their power to delay the defaults. If a homeowner stops making payments, it may be 9-12 months before they receive a notice of default in the mailbox. The banks don't want the loans because they don't want to take the write downs.

This may very well end up being the worst time in human history to lend an American money to buy a home. However, this week we received word that mortgage rates are now approaching below 5%. The lowest rates we've ever seen in this country!

Its better to think of it this way: Would you lend someone $300,000 of your money to purchase a home at a 5% interest rate? Of course you wouldn't. So what is going on here? Who is lending these people this money for nothing?

The government is, and that's where the story gets interesting.

Just a few years ago the Federal Housing Administration (FHA) guaranteed about 3% of the loans in our country. This year that total is up to 25%. It is now estimated that they are guaranteeing about 80% of all new loans created.

This week they announced that their reserves against losses had fallen below their mandatory minimum. They currently hold $30 billion in reserves to protect against $1 trillion in mortgages. This is taxpayer money being lent, not some private bank trying to create profitable loans.

The FHA requires only 3% down on their loans (the majority of new loans are choosing to only put down 3%), and with the new government subsidy (cash for dumpers) most buyers are now purchasing their homes with 100% financing. They are walking out the door with a mortgage and starting their life underwater.

The losses coming for the FHA will be monstrous and may equal Fannie and Freddie by the time this debacle has ended. (Fannie and Freddie are filling in for the other 20% of mortgage guarantees) We now have a 100% nationalized government run mortgage enterprise.

The government needs home prices to rise in order to make money in their new business. How can they get prices to rise? You know the answer to that, we'll save that thought for another day.

This catastrophe is only what is happening in the housing sector. The same initiatives are being put in place in every aspect of the economy. Cash for clunkers, cash for dumpers, cash for bankers, cash for everyone.

The people of this nation hit a wall with their ability to borrow and spend in 2006. They could not stomach any more debt. They stopped borrowing and they started saving money. This is very, very, important for an economy to heal, rebuild, and begin growing again. 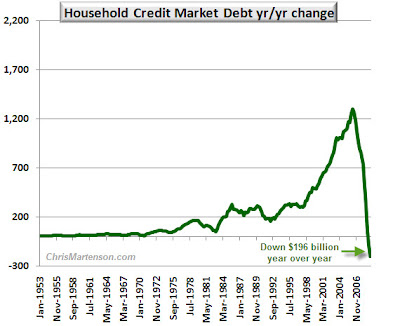 Our government will not let this healing process to happen. They will not allow the real recession to begin, and they are force feeding the new debt down the throat of every American. 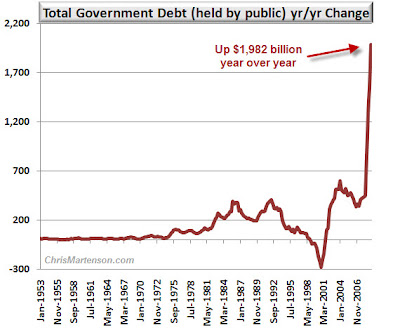 This has now created the final bubble to burst: the US bond market and the US dollar. How long before it bursts? I have no idea. I read articles from many people who saw the danger in subprime bonds back in 2003 and began shorting that debt. They were laughed at in the market for four long years until 2007, when subprime debt became close to worthless.

The same thing is coming for US debt, but it will be much worse. At least the subprime debt was backed by a home. The US bond market and US dollar are backed by the ability of our government to tax its citizens in the future to repay the debt. The citizens here now owe $100 trillion and have no productive or manufacturing base. Our economy is based on borrowing and spending, and it is entering retirement phase.

The dollar and treasury bonds are only pieces of paper. They are worth nothing.