I was out of town for most of last week so you'll have to excuse my absence during one of the most important financial news weeks of the year. There's so much to cover I'd like to try and take it in three parts:

Let's start with the financial world:

If the borrower were to default on the $1 million mortgage, you would be forced to take a $400,000 write down on your books. 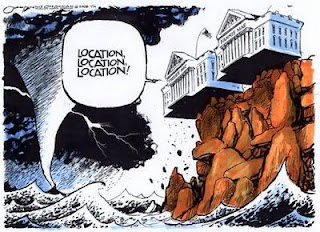 This means that you are currently insolvent, under water, or on your way to bankruptcy. However you would like to describe it.

This is the current environment for our entire financial system. Everyone is currently underwater, thus there are no new loans being created. Banks across the board are hoarding cash to prepare for the oncoming write downs.

Every second of every day they move further and further underwater as the assets on their books depreciate in value.

We have had a short term rally in the banking sector because as of March of this year, banks can now mark their assets to "myth", not to market. This means that they can say the $1 million home I was just discussing is worth $1 million.

They only have to take the loss when the loan actually defaults. And it will, don't worry about that.

A news headline read today that of the mortgage loans that have not already defaulted that were issued in 2006 and 2007, 60% of those loans are now underwater.

This comes at a time when we are just entering the second wave of option arm loan defaults. The wave that will be larger than subprime and continue through 2013.

A little over two years ago the top tier banks held a total of $2 billion in capital reserves on their balance sheets. That number now stands at over $850 billion. They have this money kept at the Federal Reserve earning .25% in interest as they wait for the oncoming defaults.

CIT this morning announced that they are moving closer to an organized bankruptcy. They are the largest lender in the country to small and midsized businesses. Once CIT goes bankrupt, the oxygen will be cut off to those businesses, and we will finally see the ghost malls and offices.

So this effect becomes the next cause in the domino chain, and its effect?........