The United States Empire has started its long decline to a third world nation. The route we take to get there is being determined daily by government decisions.

By watching from the sidelines it is becoming clear that we will not move through a slow decline, a steep collapse, but will experience full disintegration.

The Wall Street Journal reported this morning that bank reserves have now reached $1 trillion. That is a trillion in cash sitting on their balance sheets, awaiting deployment.

The Fed has stated all along that as part of their exit strategy, they would remove the excess liquidity as their short term lending programs ended. As these programs have unwound, the excess reserves have risen from $2 billion to $1 trillion. 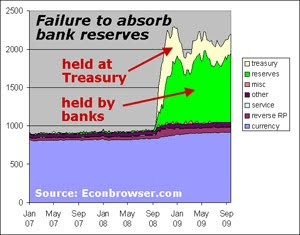 A lot of the banks' money is also working its way into the bond market. When banks can borrow from the Fed at 0%, they can then reinvest that money back into the treasury bond market at X%. Anything above zero is a profit. The money is free.

We are working our way closer to the point of D Day for Mr. Ben Bernanke. As the dollar continues to crater off a cliff, he will have to decide whether he will try to protect the currency or save everything else.

As of right now the Fed has become the mortgage market. He is printing endless amounts of money to buy new and old mortgages and he has once again pushed back the dates these programs will end. This buying is the only support the housing market has from complete collapse. There are currently estimates of over 10 million in "defaulted" homes the banks are holding off the market to prevent the losses on their balance sheets.

This stealth inventory continues to build month after month as more and more homeowners stop making payments. If this inventory were to hit the market, and it will eventually, I don't have to tell you what it will do to home prices.

The commercial mortgage is in far worse shape. The market's destiny now lays in the hands of Bernanke. If he develops a program to purchase commercial debt on a large scale, it will keep the market artificially propped up. If they do not, it will be total annihilation.

It is estimated that the Fed is now purchasing over 50% of the treasury debt issued. They do this in multiple ways. The first is direct purchases at auctions. (The $300 billion they have announced and purchased this year) The second is buying toxic mortgages from foreign central banks, which then take that cash and buy treasuries. The third is purchasing the debt from one of the 16 major treasury dealers about 4 to 5 weeks after an auction. The second two options allow it to be kept hidden from the public. These purchases finance Obama's endless, reckless, spending.

We are in full monetization mode now. All debt is being papered over with freshly printed bills.

The Fed has two choices:

1. Let the dollar fall and protect every market
2. Protect the dollar and allow the economy to completely collapse

So far they have only chosen option one, and the world markets have taken notice.
Money Supply Growth: 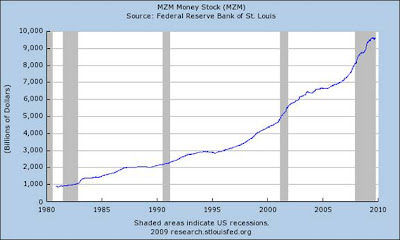 The markets follow a general pattern today that when the stock market rises the dollar falls and vice versa. It is a trade of risk against safety and has been the same since the financial crisis erupted in September of 2008.

The question is, will this trend continue moving forward?

In the fall of 2008, most of the world was caught off guard by the financial crisis and in their fear they ran toward what they perceived as safety in treasuries and the US dollar. This caused a short term massive rally in those markets.

Now that people have had a chance to collect themselves and understand the reasons for the financial crisis, I believe they will not make the same mistake and rush toward the fire as the United States heads toward disintegration.

At some point I believe we will see the stock market, the bond market, AND the US dollar all move down in harmony. This is the normal correlation between markets looking back throughout history.

The question of course as with everything is.....when?

Could investors make the same mistake again? Possibly, but to bet on that outcome is to bet against market history. The markets have already begun to diverge and as they continue it will only cause more money to flow toward other investments such as foreign currencies, foreign markets, commodities, and precious metals.