The following chart shows the growth in the number of government employed workers from 1935 to present day. 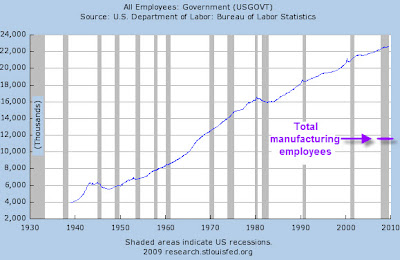 In order to pay for a government worker the money has to be taxed from the private sector workers.

Today there are 4.8 private sector workers for every government worker.

Imagine that you live on a street with six houses. Five of the houses are private sector employees and the sixth house is a government employee. Every two weeks the government employee stops by every house and collects money for their pay. On top of this, the five houses have to pay taxes on the infrastructure for their streets (roads, government vehicles, etc.)

Wouldn't you be very concerned with what that government worker was doing every week and how much he was paid? Is he earning that money? We'll get back to that in a second.

In 2008, according to data from the Commerce Department’s Bureau of Economic Analysis, the 1.9 million civilian employees of the federal government earned an average salary of $79,197. The average private employee, by contrast, earned just $49,935. The difference between them came to more than $29,000 - a differential that has more than doubled since 2000.

Hold on, it gets better.

Taking account of total compensation - wages plus benefits - and the disparity is even more striking. In 2008, total federal civilian compensation averaged $119,982 - more than twice the $59,908 in wages and benefits earned by the average private-sector employee.

Anyone with a simple understanding of mathematics can understand that this situation is unsustainable.

But why are Americans not in an uproar over having to pay for these workers?

It is because they are not paying. Their payments are being put on the credit card for future generations, plus interest.

Obama has estimated a $9 trillion deficit over the next ten years. Over half of this deficit, $4.8 trillion, will just be the interest payments to support the current debt.

Think of it as putting $100,000 on your credit card every year. Each year the interest payments get higher and higher until you get to the point that you are borrowing money just to pay the interest.

Even in this scenario you have to find a bank that is willing to lend you the money. The same thing goes for Obama. His bank is the savings of the hard working foreign countries around the world.

The will have to provide 100% of the money they work hard and save every year to cover Obama's spending and the cost of our government workers.

As you know by now, most of these countries have decided privately and in some cases publicly that they do not wish to participate.

State and local budgets are in crisis mode right now because they cannot bring in enough tax revenue to cover their expenses. The same thing will happen to the Federal government once their debt financing source is cut off.

Then our fate will be solely in the hands of Ben Bernanke the President of our Federal Reserve. He has stated and shown that he has every intention of monetizing the debt. This scenario has happened countless times throughout history and is repeating itself again today.

The next crisis will come from our currency, and it will be worse than anyone can imagine. Please watch the well put together video below for a summary on where we find ourselves today: