The Week In Review

A tremendous amount of news, data, and government plans have hit the financial world over the past few weeks. I'd like to take a minute to look at these individual topics with some actual economic and financial reality.

Let's start with the jobs report which was the big news event of the week on Friday morning. This report comes out on the first Friday of every month. Unemployment crossed 10% as 190,000 new workers were laid off. The U6 number crossed 17.5% and real unemployment crossed 22%. Last month I wrote a full article titled "Understanding Unemployment" which readers should reference to get a better scope of the numbers.

What is even more important than the total number is the breakdown on which sectors of the economy are hiring and firing. For example, the manufacturing sector lost 61,000 jobs while the education/health services gained 45,000 new jobs. The government jobs increased as well.

While it is important to have people working in the education and health sectors of an economy, simple economics explains that the manufacturing jobs are what pay for education, health, and government services within a nation. A country that produces goods and saves their money has the luxury of affording government jobs. 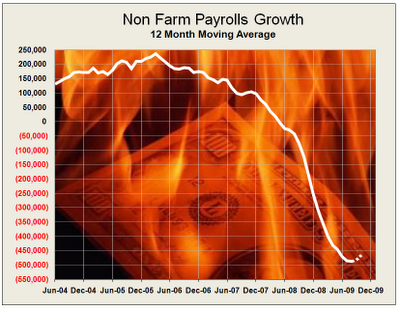 On a similar note this week the administration decided to extend unemployment benefits to help ease the massive unemployment sweeping the nation. Obama announced this move as a tremendous benefit to the economy as the people receiving the checks can now go out and spend.

One must wonder if the President is joking when he says these things.

If someone is receiving an unemployment check that means someone else was taxed in order to pay for the benefit. It is not an increase in wealth, it is a transfer of wealth. If unemployment checks helped the country, why not just send checks forever and send every family a check for $10,000 a month? Of course, taxes were not raised to send the families the money, it was borrowed and taken out of the purchasing power of our currency, the hidden tax.

Speaking of the currency, the Federal Reserve announced at its meeting this week that they would be keeping interest rates at 0% and that they planned on keeping it that way for an "extended" period of time.

The Bank of England has followed with keeping rates at .5% and the Euro Central Bank countered with their 1% stance. Both banks plan on keeping rates this low for an "extended" period. There is no difference between 0%, .5%, and 1%, they all represent essentially free money everywhere. Dumping from helicopters.

So where is this free money going? We got a glimpse this week as we received word that bank reserves are exploding. They have recently crossed over the $1 trillion mark and they continue to grow month after month.

This means that banks are borrowing money from the bank at 0% and storing the cash with the Federal Reserve at .25% interest. This $trillion in new money if lent out could immediately become $10 trillion under the fractional reserve banking system. The deflationists would argue that the money is being held to cover current and future losses on their balance sheets. They are exactly right.

However, last March banks were allowed to change their accounting standards so they could mark their assets to "myth" instead of market. This means if they have a commercial loan of $100 million and the building is only worth $50 million, they do not have to take the $50 million in losses, unless the building is sold.

This brings us to the next topic which is the shadow inventory stored on the banks books. Recent estimates show that 85% of the Florida foreclosed homes are being held off the market by banks in order to prevent these losses. Both the excess bank reserves and excess shadow inventory present the same picture:

Fannie Mae and Freddie Mac have found themselves in a similar situation, only on a larger scale. This week they announced their new "rental" program. If I was writing on this web page and trying to imagine the worst possible things the government could do, I could not come up with these examples.

In order to deal with the tsunami of foreclosures and losses hitting their books month after month, (they just went back to the government for another $15 billion to cover losses) they have decided to allow homeowners that enter foreclosure to rent their current homes at free market value and be excused from their debt burden.

This means if you owe $500,000 on a home in California and the home is now worth $200,000 (a very likely scenario) and you stop making your monthly payment of $5,000 every month, the government will allow you to rent at the market rental value of around $1,500 per month.

Hold on, it gets better.

Because you are now a renter, if you have damages to your home, or your toilet is broken, or a light goes out, you can now call on the government to come fix these problems; Big daddy landlord.

The losses from this program will be so staggering it is impossible to quantify. Losses have no meaning now for Fannie and Freddie because they are government run entities. All the losses are now paid for by the taxpayer.

Or are they? I have heard of no new tax increases to pay for the endless spending, but you know who is paying for the losses; it comes from anyone who is stupid enough to hold American currency. Unfortunately, that appears to be the American people who have absolutely no understanding of what is taking place.

Foreign dollar holders are running for their life right now toward hard assets such as gold which crossed over the $1100 mark on Friday morning.

As I said all of last year, I anticipated 2009 as the year gold would cross over the $1,000 mark and would mark the very beginning of the public entering the market. We are seeing that today as some of the early entrants are adding "small" amounts to their portfolio. The public invests in an asset because the price is going higher so as the gold price continues to rise in the coming years it will bring on more and more of the masses.

I imagine there will be a tremendous pull back coming soon in the price of gold, and there is a huge rally due for the dollar. Take these actions as a gift and add to your positions. The real value in the precious metals market today is in silver and mining stocks.

If gold sells off, which I hope it will, it will probably take down the price of silver and the mines and will present a tremendous buying opportunity.