Day 4: The Public Has Not Entered

If you ask the average American how they have their retirement invested they will probably tell you something like:

If you asked them what percentage they had in gold they would probably walk away from you and shake their head.

Most Americans do not even know how to buy gold, nevermind actually own it.

It is considered "strange" to own such a thing.

Most mutual funds, pension funds, or hedge funds have 0% invested in gold and only a few have invested a few % points of their total portfolio.

When we crossed $1,000 we entered the third phase of the bull market: optimism. This is the longest phase of the four and it is the most volatile.

At the start of this phase you see the gods of the financial world enter with full force. Names like John Paulson, David Einhorn, George Soros, Julian Robertson, and Jim Rogers have been piling into the market over the last 12 months.

This is the group that was considered "strange" a few years ago when they were buying investments that shorted something called "subprime" debt. Paulson made $15 billion in 2007 shorting subprime, which was 15 times the legendary profit George Soros made shorting the British Pound back in 1991. Paulson personally made $4 billion in 2007, shattering all annual records. He now has 46% of his entire hedge fund in gold.

All investments move through periods of being under valued to being over valued. Gold went through a similar process back in the late 1960's -1980 and it has just started again. You can see where inflation adjusted gold currently stands from its previous peak back in 1980 by looking at the graph below. 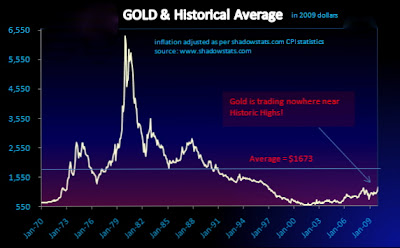 It will follow the same pattern during this bull market again. The public will come rushing in at the end as they always do and push the prices to unimaginable levels.

John Paulson and the group above will then be ready to sell the gold they are buying today. At that point it will be time to move back into stocks, bonds, and real estate.