Back in March, Obama told us we needed to provide a $700 billion stimulus program that would bring us out of recession. He promised the program would create 3 million new jobs. A few weeks after the bill was passed, they passed another $400 billion supplemental stimulus bill.

All total was at $1.1 trillion for job creation.

As I said at the time, the failure of this bill would bring on another stimulus bill, then another.

We now have the ability to see the effects of the first bills. We have lost 3 million jobs, and our economy is mired in deep recession. 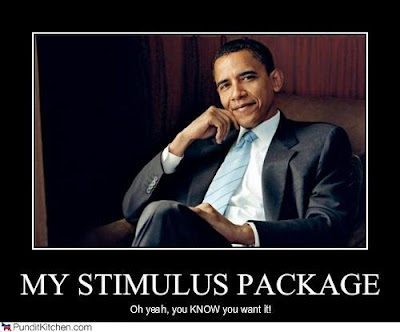 Last week the government announced a new stimulus bill that will begin at $145 billion. This bill has been tagged the bill for “main street,” since the money for the last bill mostly entered the hands of wall street.

Here’s my prediction for the bill: It will be an economic disaster.

Why do I think this? Do I just guess on how well they will use the money? No, it’s Econ 101. Austrian Economics that is. Texas Tea.

When the government creates a stimulus bill it means they take money from a productive sector of the economy through taxes. They then use the money to try and “stimulate” because they think they can utilize the money better than the free market. They take from one hand and give to the other.

Here is the secret: They NEVER will be able to run the economy as productively and efficient as the free market. It has NEVER happened in history and it NEVER will.

The most productive thing a government can do is shrink in size and become less damaging to the economy. This tactic has ALWAYS worked throughout history. It is also the exact OPPOSITE of the playbook the Bush and Obama Administrations have run.

We thus run up higher and higher deficits with each bill and weaker our currency further.

This is very bullish for the price of gold. The gold bull market is still young.