This past year we have seen money printing from Central Banks around the world that can only be described as biblical. The following chart shows the year over year balance sheet growth of some of the world’s major Central Banks: 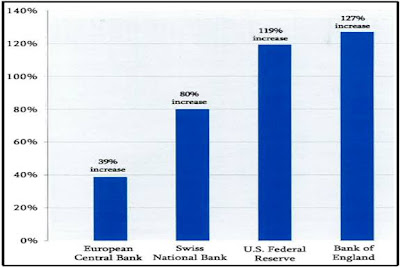 The Fed has embarked on a program known as Quantitative Easing, which is a fancy word for printing money and buying US treasury bonds (government debt). The total debt purchased through this program was $300 billion.

It has also created a program to buy mortgages. Bernanke has told us the buying spree will total $1.3 trillion and end in March 2010.

Along with these two monsters, they have injected endless amounts of liquidity into the financial system - specifically agents like AIG, GMAC, and Citigroup, who are now government money pits. 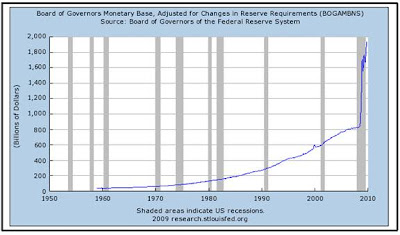 The Fed has told us all year that they have an “exit” strategy to remove this extra money from the system, just as they told us back in 2006 that the subprime problem would only create $200 billion in losses and it would not effect the overall economy.

A closer look at the numbers and the future shows that not only will Bernanke not have an exit strategy, but that the Fed’s balance sheet has only begun its exponential growth.

For fiscal 2010, Obama will run a $2 trillion deficit based on rosy projections of economic growth. They will also have another $2 trillion of short term government debt that will have to be rolled over and re-financed. That leaves $4 trillion in government debt to be financed next year in order to keep the USA from declaring bankruptcy.

The governor of the Bank Of China this week said, "It is getting harder for governments to buy United States Treasuries because the US's shrinking current-account gap is reducing the supply of dollars overseas."

What this means in simple terms: over the past few years our economy, which has been based on borrowing and spending to buy foreign products, is now self-combusting.

Why? Because our citizens are no longer able to stomach additional debt. They have all they can handle and are now starting to save money.

Previously, we would purchase the foreign goods and run large trade deficits. This means they would send us the products and we would hand them dollars that we borrowed. In turn, they would take those dollars and re-invest them back into the United States. This kept inflation low in their countries and also kept our currency strong allowing us to buy more of their goods.

It is obvious that this situation is unsustainable and eventually must change. We have reached that point.

Because we are buying fewer of their goods, we are giving them less dollars. This means they have less money to purchase Treasury bonds.

This does not take into account that over 50% of the foreign treasury holdings are concentrated in China and Japan. Both countries have not only stated that they do not want to purchase more, but they are looking to sell what they already have.

The following Chart shows China's purchase of debt leveling off in some areas, and in most cases falling tremendously:

Any bonds foreign countries sell add to the $4 trillion that must be sold next year. It is a tidal wave of supply.

Three things have happened during 2009 that have kept our bond sales running smoothly:

1. The Federal Reserve has been making direct purchases of bonds (the $300 billion just discussed).

2. The Federal Reserve has been making indirect purchases of bonds.

Here is how they accomplished the second strategy:

You probably have heard the term 'Federal Funds Rate', currently at 0%. This is the rate which the Federal Reserve lends money to banks. This year, the large banks have borrowed an enormous amount of money at 0% and then invested that money in treasury bonds at 3-4%. It is clearly obvious how easy this strategy is to making money. A 5-year old can do it.

The total purchase from banks into treasuries this year is over $250 billion. This has been an enormous portion of the demand.

The second strategy the Fed has used has been a sleight of hand trick with the $1.3 trillion mortgage purchase program.

Foreign central banks accumulated large quantities of mortgages during the US housing boom years. For obvious reasons, they now wish to unload that toxic debt. The Federal Reserve has approached those banks and bought their mortgage holdings in exchange for freshly printed cash. The central banks have taken that cash and used it to purchase Treasury bonds.

This can be seen every week at the Treasury auctions through a term called “indirect bids.”

The Federal Reserve has promised to not only stop these programs next year, but remove the liquidity with their “exit strategy.” They have not yet explained what their exit strategy is.

The reason for this is because an exit strategy does not exist. The programs will not only continue, but grow as we move forward.

As foreign countries are no longer able to purchase our debt due to a lower trade imbalance AND lower demand, our government is running up debt at a rate the world has never seen.

I will discuss all government debts around the world in a future day of Christmas, but the point of this day was to show you why the money printing will not stop due to increased American debt.

We are currently in the eye of the storm for housing loan resets and foreclosures. The Fed knows this. They understand that there is no way they can stop buying mortgages without the housing market collapsing.

Fannie Mae, Freddie Mac, Ginnie Mae, and the FHA are heading for SERIOUS insolvency problems in the years ahead. Not o

nly will the Fed have to purchase the majority of their bad loans, but they will have to help with bail outs of these toxic monsters.

This does not even take into effect the bail outs that will be needed for the FDIC, commercial real estate, credit card debt, and state and local governments. These are looming crisis triggers that can emerge at any moment.

To summarize, the Fed has boxed itself in and its only hope of exit will be to expand the money supply.

As investors realize this, they will move toward gold. The gold bull market is young.