This morning we received the weekly jobless claims.  The following chart shows where we are historically with total current jobless claims: 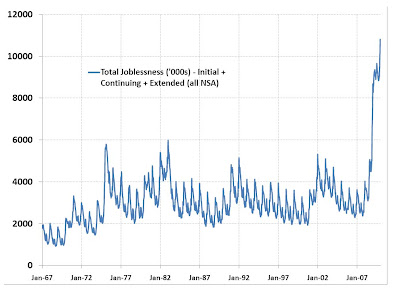 The media has spun this in a positive light all day repeating: "we have no where to go but down."  Unless we go up.

The monthly jobs report comes out tomorrow.  It will be filled with "seasonal" adjustments and most likely will "better than expected" taking the stock market higher.

We also received word today that the government will be selling $159 billion in treasury debt next week.  Remember, in 2007 our entire yearly deficit (a record at the time) was $470 billion.

Its finally time to start your engines for the $4 trillion in debt that will be sold this year.

In line with this announcement was a warning from regulators that was sent to major financial institutions to protect themselves from rapidly rising interest rates.  When excess supply comes with lower demand prices fall.  In bond term this means that rates are rising.

Bill Gross of PIMCO, President of the world's largest bond fund, released his monthly newsletter which can be read here.  It basically announced his all out departure from treasury bonds and essentially bonds in general.  He is moving his fund heavily overweighted into cash.

Ambrose Evans-Pritchard wrote a fantastic article today on the coming default on Greece debt.  It appears the Euro zone wants no part of a bail out.  We'll see.  A Greek default would bring a domino effect to other Euro countries and cause extreme fireworks in the currency markets.

Another big event to watch unfold as we move through the year.