The Clock Is Ticking

A major portion of my focus here over the past few weeks has been on the Fed's treasury purchase program coming to an end next month.

So, what exactly is at stake if the Fed keeps their word and stops buying? 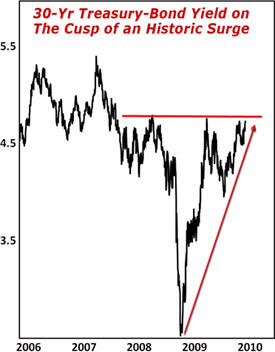 The current rate as you can see has risen up to around 4.5%.

The chart has formed what technicians like to call a "head and shoulders" pattern.  You can see the large head coming down on the chart with its two shoulder on either side.  This usually means a strong break is coming one way or the other.  If interest rates rise just a bit further, breaking through the red resistance line, it could be up, up, and away on rates.

So, like I asked earlier, what is at stake if rates were to rise?

In a word: everything.  Let's go through some of the major effects:

1.  The cost for the government to borrow money, the lifeblood of our economy, would rise significantly.  We would have to borrow more to pay for this increased cost.  How much more? I discussed that topic last weekend in an article titled, "Obama's Credit Card Interest."

2.  Mortgage rates would rise as well since they are linked directly to the 30 year bond rate.  Remember, mortgage rates today are at all time historical lows.  They have nowhere to go but up.

If they were to rise to their historical average of 10% it would double the mortgage payment for any new buyers of homes, crushing the market values.  This scenario is not only possible, but would happen rather quickly if the Fed and the government were to remove themselves from the housing market.

3.  Over the past 7 months the average American has left the stock market and piled into bonds.  They have been told by their financial advisors that bonds provide a "no risk" investment.

US households today own $801 billion in treasury bonds, $979.5 billion in municipal bonds (state and local government bonds), and $2.4 trillion in corporate bonds.

If rates rise it pushes the value of these assets down and would have a similar effect to the slaughter seen in the stock market crash of 2008.

These three consequences of rates rising are why I believe the Federal Reserve will not stop buying the treasuries.

They will print, and they will buy. .

If you believe Bernanke then I would be heavily shorting long term bonds.  If you don't believe him and think he will continue buying, then I would be loading up on gold.

Or you can do both, which is the favorite strategy today for the hedge fund legends.