However, the actual unemployment rate fell below 10% to 9.7%. This will most likely be touted as progress from our leaders but an understanding of the numbers shows otherwise.

The reason for the total percentage drop is not an improvement in unemployment, but an enormous part of the workforce entering the discouraged category. This means they have been unemployed for so long that they have fallen off the unemployment claims list. The government counts these people as have given up looking for work and therefore are not counted as part of the labor force.


A better measure of unemployment is the Labor Force Participation Rate, which provides information about the total number of people employed as a percent of the total population. This number includes the discouraged and can be seen in the chart below: 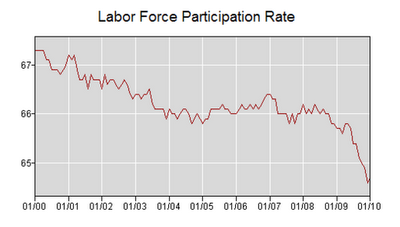 The next chart shows where we stand compared to previous recessions with that percent job loss and the amount of time it took to recover: 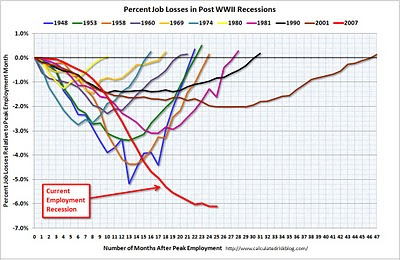 And finally the U6 government unemployment number which shows the real unemployment rate including the “discouraged.” It has just hit a new high at 18%: 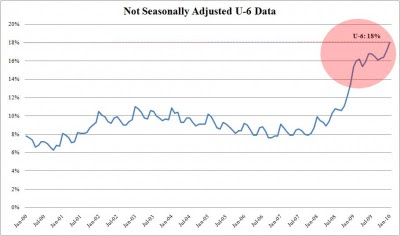 We are not entering recovery, but just beginning the second phase of the collapse.  Look for this to lead to the next stimulus bill and then the next stimulus bill from Washington. Unfortunately, the bills make the unemployment situation far worse with each cancerous drain from the efficient portion of the economy. An article discussing that topic further can be read here.

The continued job losses and unemployment rate will only add to what is in store for home owners.....