3. Why Home Prices Will Fall

We are on the precipice of the next long leg down in the housing market. Unfortunately this one will be far worse and even more tragic because home owners have been told and promised that the worst is over.

The government has embarked on short term stimulus boosts to try and spark artificial demand for homes. One of those is the home buyer tax credit that will end this March. When the tax credit ends it will lower the demand for housing.

This lack of demand will hurt the chances of clearing out the next oncoming wave of foreclosures, also known as the shadow inventory.

Over the past three years the “cure rate” (brought current on payments) for homes that are 90 days or more delinquent has fallen from 40% to less than one percent 1%.

LESS THAN ONE PERCENT

There are currently 2 million homes past this stage, and there are another 2.3 million homes that are already in foreclosure or have been seized by banks. (Real Estate Owned)

This shadow inventory has been held off the market by banks. They know when they sell the homes they will take massive losses and they are just trying to keep their doors open for business.


The following chart is a fantastic visual to help you see the total inventory of homes including the shadow: 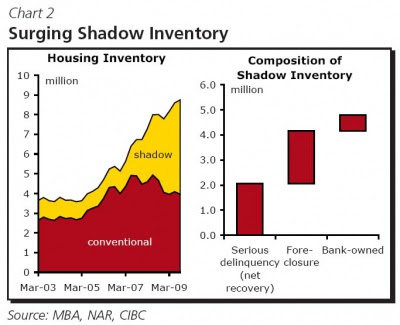 The next major problem for the housing market is what has been termed strategic defaults. This is when people can make their home payments but walk away anyway because their mortgage is higher than what their home is worth. (Underwater)


Of the roughly 2 million foreclosures in 2009, 25% were strategic, as can be seen from the chart below: 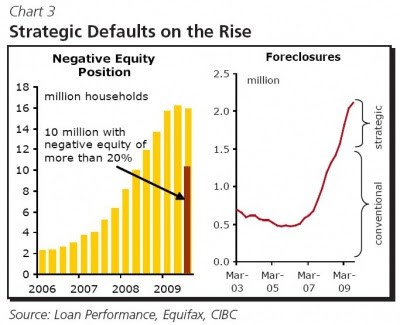 The New York Times ran an article this week titled “No Help In Sight, More Homeowners Walk Away.” In it they described the critical level at which homeowners are most likely to “walk away.” This level was when the home’s value had fallen below 75% of the total mortgage value.

They estimated that by the third quarter of 2009 4.9 million homeowners had reached that critical level.  Look for an enormous amount of these Americans to begin to walk away this year, adding to the surging supply of homes just discussed.

The final piece to the puzzle, and by the most important, is the mortgage market. As I have discussed in great detail, the Federal Reserve last March created a 12 month program to purchase $1.3 trillion in mortgages.

This program not only became the entire market for mortgages, but it kept interest rates at an extremely low level. The following chart helps show the Fed’s purchases in relation to mortgage interest rates: 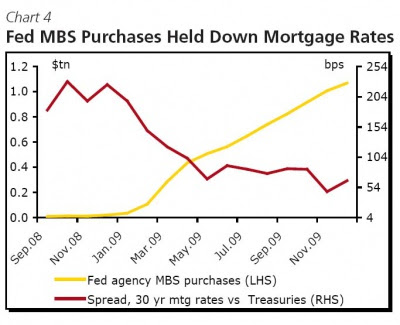 As I have repeated over and over, the Fed’s mortgage purchase program which ends next month will have to be extended in order to keep the housing market from seeing a rapid collapse in price.

This week the Washington Post reported that Federal Reserve Bank of New York President William Dudley said this week that, “The Federal Reserve would consider reopening its program to support the mortgage market if interest rates spiked or the economy showed new weakness.”

I expect a new program to be announced in a matter of weeks.


2010 will begin act two of the housing market collapse. Option Arm re-sets will start this year and continue for the next three years. The total value of option arm loans is greater in size than subprime, and the loans are far more lethal. 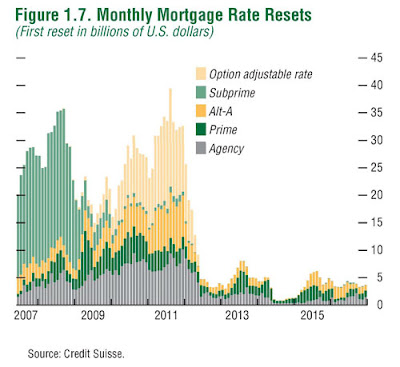