We have been in a 27 year bull market for treasury bonds. (Gov’t Debt) As recently as 1980, the government was paying an average interest rate on its debt of 10%.

Can you imagine that?

Today the interest rate on government debt is the lowest it’s been in history. Over the past year we have added an additional $1.5 trillion in debt to our total $13 trillion. During that period interest rates fell from an average of 2.6% to only 2.2%.

Think of it like calling your bank for a credit line and the bank trying to determine how much to charge you for the loan in interest.  This is Obama's interest payment.

Please understand this Treasury bond market, not the NASDAQ market in the late 1990’s, not the real estate market during 2005, is the greatest bubble in world history.

The record low interest payments of 2.2% a year come at a time when:

1. It is crystal clear that the debt can NEVER be repaid
2. The debt supply has been promised to grow exponentially in the years ahead


The following chart shows how much the yearly interest payments add to the total amount paid every year.  Again, think of it like the yearly amount of interest you pay on your credit card bill. Look at the light green areas at the bottom of every yearly bar. 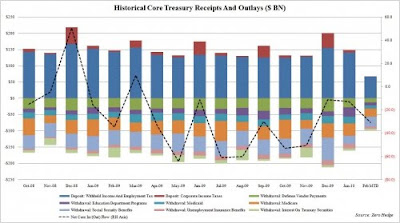 A question I may pose is; what would happen if those interest rates rose from all-time record low levels to just something slightly more normal. What would this do to the total yearly cost to finance the deficit?

That would be an additional $700 billion we would have to add every year to the deficit.


The following graph shows the breakdown of each scenario:

Could this happen again? Of course. Things are far, far, worse today than they were in the 1980’s. So if that is the case, why are interest rates not higher? Ah, there is the key question.

Last year the Federal Reserve printed 300 billion dollars and directly purchased treasury bonds. (Gov’t debt) They printed another 1.4 trillion dollars and purchased toxic mortgages. The vast majority of the people who sold them the mortgages then took that money and bought government debt.

This is why I believe the Federal Reserve will continue to print money and buy the debt.  Not doing so would make the payments instantly impossible to manage.

So what is the good news?  There are some tremendous buying opportunities coming in the world of Commercial Real Estate...........