There are two kinds of debt in this world: Good debt and Bad debt.

If a person/company/country borrows money for a productive use it is good debt.  For example, if I go to the bank and ask them to borrow $1,000,000 to buy an apartment complex and the apartment generates enough income to cover the debt every month, that is good debt, also known as an asset.

That apartment will then become a business where people are hired to manage the property and do maintenance on the property.  It generates jobs and grows the economy.

The same goes for a business that borrows money to invest in machine equipment or medical research or software.  The debt will be paid with future cash flow and allows the business to generate additional profits.

It is possible to put a value on the return an entity receives from the debt they borrow.

The following chart shows the return the Federal Government has received from every dollar they have borrowed going back to 1960: 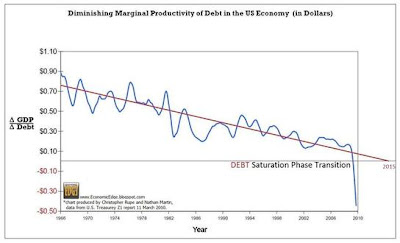 During the 1960's a dollar borrowed generated almost a full dollar in return.  This means the United States was running an excellent business.
When looking at where we are today you see a different story.
For every dollar the government borrows today it is now losing 45 cents.  This is staggering.  The United States is running what can be described as an extremely unhealthy business.

This brings us to the present day decisions our leaders are currently making for the country.

Before I go on, let me emphasize that I would love for everyone in our country to experience the world's greatest health care in unlimited amounts.  I think taking care of your health is the most important part of life.

That being said, the new health care bill has to be paid for.  Estimates show that the bill will cost the country $2.4 trillion and it does not go into effect until 2014.  We pay now, and we hope to receive in 2014.

We are currently spending just under $800 billion per year on defense spending.  It feels as if we have a military base in every city in the world.

Is that necessary?  Is health care more important than that expense?  I think one day soon we will have to decide.


The following chart provides a great visual to show where our money will be spent in 2010: 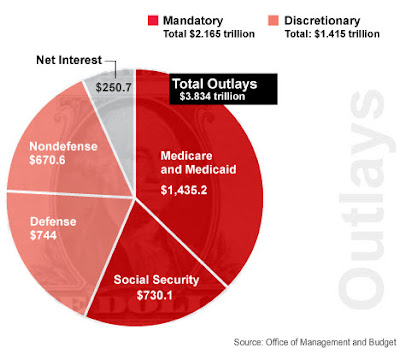 Running yearly deficits between $200-$400 billion was never a problem in years past because China always purchased our debt and they always recycled it back into America.  People always said the deficits were future problems when this paradigm ended.

Well, it has now ended.  China has stopped buying, and they are now selling.  The deficits are no longer $200-$400 billion, they are now $2 trillion, every year.

We have now run over the cliff with no parachute.  Social Security will take in less this year than it pays out.  This was not supposed to occur until 2016.

The treasury debt auctions this past week could be described as scary.  Rates are moving up across the board.  Insurance on United States debt now costs more than companies such as Berkshire Hathaway and Exxon.

Stay focused on what is happening.  The world will be a very different place, very soon.