US Debt: Who Is Selling?

The January numbers were released today showing the buyers (or more importantly sellers) of US treasury debt.

After a monster sell off in December, China continued its selling in January by unloading $6 billion in debt.  Japan was a net seller as well.

The following chart shows the world's two largest treasury holders (the red and blue lines; China and Japan) ridding themselves of US debt. 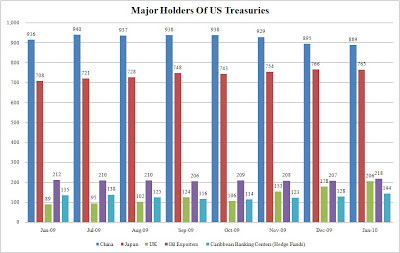 The big mystery for the last four months has been the enormous purchases coming from the UK. (A country that is insolvent like the US and cannot afford to purchase our debt)
The two main suspects behind these purchases are China and the Federal Reserve, who could be purchasing from this country for political reasons. (The Fed hiding the purchases is obvious, China is a little more suspicious.)
Time will tell who is behind the buying, which is the most important news story this year.