America Is Back Part I: Free Housing

As you can see by the magazine cover I've posted to the right, Newsweek has decided to announce that America is back.  We have once again regained our prosperity and it is clear sailing from here.

I love waking up in the morning during times like these.  It is like living in a cartoon world.

To show my appreciation for Newsweek magazine, I've decided to dedicate this entire week to writing about how America is finally back.  A special thanks goes out to our political leaders, the Federal Reserve, and the media for bringing us back to prosperity.  This is for you.

There are approximately 55 million mortgages in our country.  We received data today that 7.4 million people are not paying their mortgages, but still living in their homes.  13% of all mortgages.

Think about that for a second.

Imagine if you could stop paying your rent/mortgage payment every month.  How much would that help your bottom line?  How much more would you have to spend on restaurants, clothes, and cars?

Much more.  And this has been a major contributor to America's comeback. Estimates show that about 50% of those 7.4 million are not paying on their mortgage because they are smart.....i mean....in financial vocabulary they are "strategically" defaulting because they are underwater.  They owe less than the home is worth so they'd rather not pay and live for free.


The banks don't want these mortgage loans or the homes.  I watched the movie 2012 last week, and I imagined the people in New York City looking up at the tsunami wave that was about to wash over the city as the same feeling the banks have today looking at the coming foreclosures. 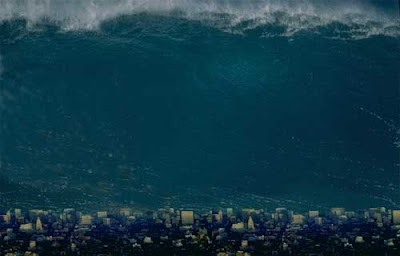 Last year we had 2 million foreclosures, a new record up from the previous year's 1.8 million.  Estimates show that we are moving ever closer to the point where 40% of the 55 million mortgages will be underwater.  How long before those people make the smart.....i mean....."strategic" decision to live for free?  What is 40% of 55 million?  What would that do to home prices?