We received details last week on the Federal government debt sold during the month of February.

The chart below shows China selling again.  They unloaded another $11.5 in United States debt.  This continues to be the most important story of 2010.

However, our treasury auctions have continued to run smoothly in the face of selling from our largest creditor.  Who is doing the buying?
It continues to be the UK whose treasury holdings have surged from $106 billion in October to over $230 billion in March.  The following chart shows the extraordinary rise in UK holdings: 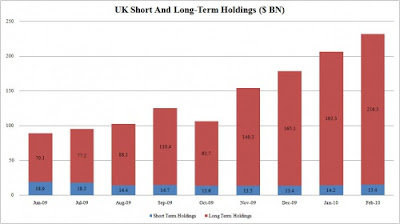 Why is this important?

Because the UK, unlike China, has no money and is currently running massive government deficits themselves.  This has raised red flags everywhere from investors that can connect the pieces that the most likely buyer is the Federal Reserve who is using the UK as shelter from the public eye.