The two largest companies that show the current health of the commercial real estate industry have released their data for March.


Real Point shows the Commercial Mortgage Backed Securities (CMBS) delinquency for the month of March crossing 6%.  TREPP now has the delinquency at over 8%. 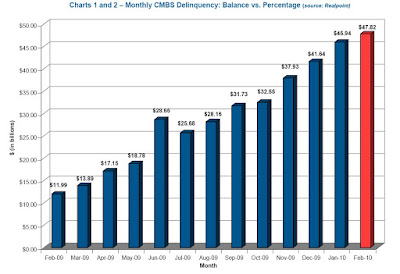 After a slowing month over month percentage increase in February, which increased the hopes for many that the worst was over, the month of March clocked in at the highest month over month delinquency rise ever.


Elizabeth Warren this week on CNBC said that by the end of 2010 half of all commercial real estate loans will be under water.
This is all frightening news for a market that needs to refinance $1.4 trillion in debt over the next 3 years.
The following chart shows the month over month delinquency rate for each type of property.  As you can see the rise in the month of March for the multi-family (apartment) sector was tremendous: