On Monday this week I took note that Freddie Mac interest rates had jumped from 4.99% up to 5.08% since the Fed ended their mortgage purchase program. 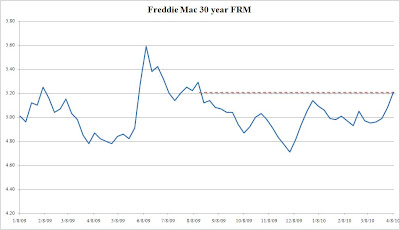 Yesterday the Mortgage Brokers Association announced an enormous rise in the 30 year fixed rate mortgage from 5.04% to 5.31%.
I would imagine Bernanke is watching these rates like a hawk, the eye in the sky, ready to pounce back into this market should rates continue to rise. 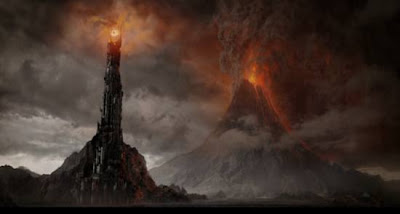 If mortgage rates were to rise to the 6% to 7% range, (they would already be double that without Fed intervention) it would bring the housing market to its knees.
The 30 year treasury bond auction today clocked in at 4.77%.  The 10 year bond this week crossed over the important 4% level.
Why is this important?
Treasury bond rates have a major impact on mortgage rates.  If an investor can get a guaranteed 4.77% return over 30 years lending to the government, would they be willing to lend to an American homeowner for 5.21% over 30 years?
Risk free at 4.77% vs. massive risk at 5.21%.  Which would you take?

Chris Martensen has written another incredible article discussing the future of the treasury bond market (the most important story of this decade).  Last year he wrote the original shell game, which was probably the most important article of the year.