This morning we received the CMBS (commercial mortgage) delinquency for the month of March from RealPoint.  These are the owners of commercial real estate that are no longer paying the debt that backs the property. The following graph shows the fresh highs of $51.5 billion or 6.4% of all commercial loans. 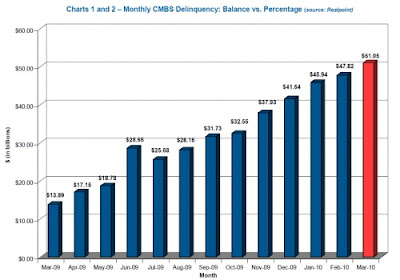 They also had some projections on loan delinquency moving forward and their more stressed scenario shows 12% of all commercial loans entering default.
The pretend bottom in commercial real estate is no where to be found in the monthly data.
Where the real price decline is felt most is in the banking system.  The FDIC was forced to close 7 new banks on Friday, and the losses will take another $7.33 billion from their "insurance fund."

The FDIC's "insurance fund" fell into the negative last year, hitting a $20.9 billion deficit in December.  With this year's losses, the fund's deficit has grown over $36.8 billion.