Act I can be thought of as the subprime/credit crisis that began in August 2007 and took down markets worldwide.  Act I finished with central banks around the world pumping unprecedented liquidity into the system and creating a temporary reflation.

The system was not allowed cleanse itself of the toxic debt during Act I.  Instead the toxic assets were nationalized and became part of the government balance sheets.

We now find ourselves at the beginning of Act II, which is where the government balance sheets began to experience strain and many will move into crisis as we have already seen in Greece.

Behind the scenes right now Spain is in chaos.  The banks within their border have stopped lending to each other creating a liquidity crisis.  Banks will only lend with the European Central Bank (Europe's Federal Reserve), and the money being held over night at the ECB is hitting new records every week.

This is the exact same scenario that took place during our subprime crisis.  Banks overseas do not know how much government debt from Spain, Italy, or Greece that other banks are holding.  If you lend to a bank and that bank cannot open its doors due to their government debt holdings losing value, then you have lost your money.

This is what took place with Lehman Brothers.

Just as Act I saw the crisis move from subprime mortgages to credit cards, to auto loans, and then to commercial real estate loans, Act II will move from country to country.


It is important to position yourself today with an investment portfolio of strong government debt.  Niall Ferguson of Scotia Capital recently created a presentation to show which countries were in the most danger.  The following graph shows the order of strength: 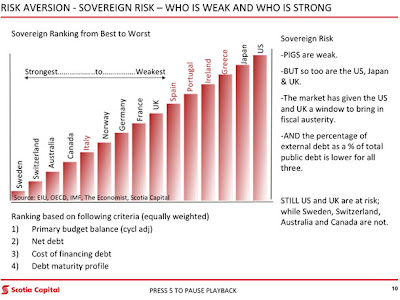 As you can see, the United States is in the most danger, followed by Japan, and THEN Greece.

Countries such as Canada and Australia are some of the strongest.  Their currencies and bonds should be viewed as a safer location during Act II.

During Act I Bear Stearns was the first major bank to fail.  Lehman Brothers and Merrill Lynch had equally tarnished balance sheets at the time of Bear's failure, but they did not go down for another eight months.

That doesn't mean investors should have waited till the very last minute to sell their Lehman and Merrill shares.  If you know a company is insolvent and can never recover then you need to sell before the public loses confidence in the asset.

The same concept applies for government debt. The United States is now insolvent and can never recover.  If Americans paid 100% of their income in taxes, meaning they gave every cent of their paycheck to the government, it would not cover the annual deficit.


Americans are not providing 100% of their paychecks to the government.  In reality expenses are rising exponentially as income (tax receipts) plunge as can be seen in the following graph:

The time to sell your United States debt and currency is before the crisis hits our shores, which will be in the later stages of Act II.

Make a plan for your exit strategy now.  You cannot buy fire insurance when your house is on fire.  Create a life boat of assets that will be safe during this coming storm and begin to purchase them when they go on sale.

Act III, the final act, will be in the form of a currency crisis.  At this point the house will already be on fire and there will be two classes of American citizens:

Those who bought insurance and those who did not.