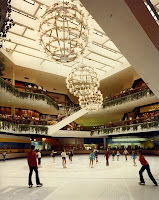 There is a mall about 2 miles up the road from where I live in Charlotte.  It was purchased in 1998 for $54 million.  Over the years its value rose as we moved through the real estate bubble.

This past week the property was sold again.  Purchase price?

The property still had a $42 million loan and entered foreclosure a few months ago.  The same is happening for shopping malls, office parks, and apartment communities across the country.  And we haven't seen anything yet.

Did the new investor overpay?  Probably. He is trying to partner with the city to help the project.

Perhaps he has been watching the important consumer sentiment numbers that have been extremely positive over the past few months.  This has given retailers hopes that the American buyer is finally back.

This morning we got the most recent consumer sentiment number, which was down 15% at 52.9 from 62.5.

Soon after the number was released, Obama and Bernanke gave a live televised interview to let us know that the economy is in full recovery and the new financial reforms will protect Americans from any future crisis.