Every time you pick up your paycheck on Friday morning there is a deduction called "social security" payments.  This has been deducted every Friday from paychecks across the country for many decades.

As you know when a person reaches a set retirement age in our country they become eligible for a monthly social security check.

Every month up until this year there has been a surplus in social security income (money collected from pay checks) compared to what has been paid out. (the monthly checks people receive)

The government has always told us that this surplus is savings that they will use in the future when the baby boomers retire and there is far less income coming in and far greater payments going out.

What many people do not know is that every year the government spends this surplus.  They take the money, use it, then replace it with an I.O.U.  There is a drawer in the White House that is the social security fund.  It is a file full of pieces of paper that say I.O.U.


This was not originally anticipated as a problem until 2027.  Then estimates were moved up to the year 2016.  That was until we received word that, surprise!, this year, 2010, the surplus has run out.  The chart below shows the income and expenses crossing. 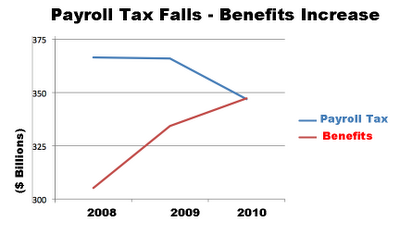 Not only has the government lost their make believe surplus account which they used to buy other fun things, they have to borrow every month now just to make the payments.
Some analysts now estimate the coming social security bail out at over $100 trillion.  This will not be in the year 2027.  This bail out is needed now, and it will grow exponentially every year as baby boomers continue to retire in mass.
The United States as a country is bankrupt.  It currently owes $13 trillion and the deficit now grows by $2 trillion every year.
The money used to pay this entitlement spending will come from the Federal Reserve.  It will come from a printing press.