The debt contagion is spreading rapidly around the world.  It moves like a silent virus, attacking country by country.

Earlier this week we heard news that Brazil had a failed auction on their long term bonds.  This means that they did not like the interest rates investors were willing to lend at, therefore they said no thanks.

The same thing happened this morning again in Romania.

In Hungaria the CDS (insurance on debt) are skyrocketing and the IMF has already boarded a plane to talk to their leaders about solutions to the coming crisis.

Nothing has been solved in Europe as the contagion continues to move through the PIGS.  (Portugal, Italy, Greece, and Spain)

The volume of debt to be financed in Italy this year is ten times that of Greece.  They have a larger portion of income, but regardless, there is no money to finance any of these sovereign bankrupts.

Spain has seen a near collapse in their banking system as many of their large banks have needed bail outs over the past two weeks.

All the PIGS CDS continue to rise, meaning investor's fear of default continue to rise, and it appears they have brushed off the $1 trillion bail out.  The Euro currency has continued its decent lower as well.


The following chart shows total PIGS debt needed to be financed over the next few years.  Total: Just a shade under $2 trillion. 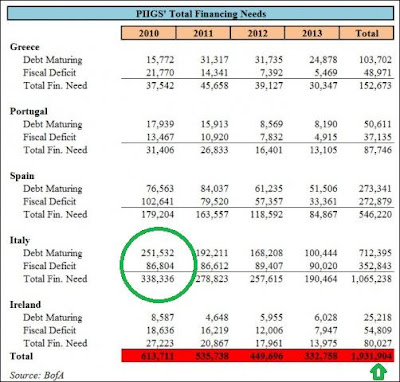 Behind the scenes the contagion has already entered the UK.  They have topped the leader board week after week recently in total volume CDS.  (Large investors buying insurance on their debt)

This crisis will ultimately lead to Japan as well, which has a debt to GDP level of over 200%.

Meanwhile the USA has been the biggest beneficiary of the global debt meltdown.  Investors have rushed back into treasuries (US gov't debt) over the past four months as they have sought perceived safety.

Iran announced yesterday that they will be diverging themselves of their European debt and significantly adding to their dollar position as well as gold.

Events are happening so fast it is hard to keep up as the contagion moves like a black fog.

It is important to remember that the final destination of the crisis will be on the shores of the United States.  As we are the beneficiary of the crisis now, it will soon be the exact opposite.

The crisis here will begin with our state governments (muni debt) which are already in the early stages of collapse.  I will explain the full extent of the muni debt disaster in a future article but the bail out that will be needed here will be monumental for both state debt as well as government pension funds.

All roads lead to a global currency crisis as investors are losing faith in paper currencies around the world.  The final rush will be to gold and silver.

Hopefully the US Mint has plenty of metal to sell to the public......