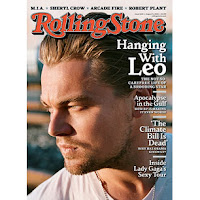 Leonardo Dicaprio is on the cover of Rolling Stone this week.  He spends time discussing his life as well as his new move, "Inception,"  which is by far the best movie of the year, and in the top 5 for movies this century.

If you haven't seen it, go see it.

In the article he also briefly mentions a movie that he recently saw called "Collapse."

The movie was an independent film that was originally intended to be about a completely different topic.  The film's crew flew in to visit a man named Michael Ruppert to ask him a few political questions.

When they turned the camera on and began asking questions he started to go into mesmerizing detail about events he had recently predicted, and what his vision was for our future.

When the film crew finished asking questions, they abandoned their original premise for the film and they decided to make the entire movie around Michael Ruppert's interview.
I saw the film last year. It came out on DVD June 15th, and it is worth a night with popcorn if you are looking for a real life horror movie.

This past week he did an interview with Jim Puplava discussing the film and his new book that he decided to write as a follow up to the film's massive response.

The interview can be heard here.  The following is the trailer for the film: