We received the July Jobs Report this morning, which comes out the first Friday of every month, and it is merely an extension of what I discussed earlier this week in The ADP and Beyond.

We lost a total of 125,000 jobs, which was a majority of census workers leaving the workforce.  The unemployment rate was lowered to 9.5% from the 9.7% it was at last month.

The reduction in the unemployment rate is due to the size of the labor force participation shrinking by 652,000 people.  This means people have been unemployed for so long that they are giving up looking for a job.  When people have given up, the government no longer counts them as being part of the work force.

We also received 147,000 "jobs" from the birth/death model.  The government assumes that 147,000 jobs were being created by new small businesses being born and hiring. (Birth/Death)  They make this number up.  The reality, of course, is that small businesses are closing their doors and firing employees at a rapid clip.

But at least it keeps the hopes alive for a little longer.

The following chart shows where we currently stand in our employment recovery compared to previous recessions. (Red line)  Keep in mind that this is with trillions of dollars of stimulus money: 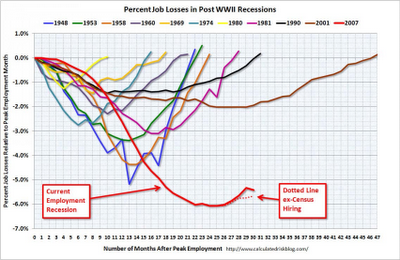