My view and outlook since the beginning of the second half of the year was that we would see a period of disinflation where asset prices fell across the board due to surprising economic deterioration.  I felt that both the Federal Reserve and Congress would then put together a combined stimulus to try and push markets upwards into the elections.

The first step has occurred on schedule as the markets have begun to roll over, and the economic data has been a disaster across the board.  The economy is weakening in every possible way. 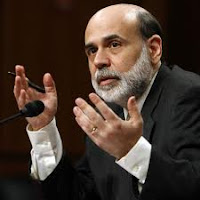 My surprise has come with the next step.  I assumed that the Federal Reserve would wait until markets fell substantially before announcing their plans for additional stimulus, is essense, "surprising" the markets with good news.

However, before we have even reached the real fall in asset prices, the Federal Reserve has already announced their plans for the second round of Quantitative Easing.  Ben Bernanke did so during his testimony before Congress two weeks ago, and the Federal Reserve President of St. Louis not only wrote a paper this week outlining his desire for additional stimulus, he even sat down with CNBC for two hours and told the world it was coming.

Why would the Federal Reserve play this card so early?  This is the important question.

My guess is that they are looking at the exact data that I am, and they understand the magnitude and swiftness of the economic decline that is taking place.  They want to let the world know before markets fall that they stand ready with an unlimited amount of printed dollars to support the markets.  This is in stark contrast to the way the previous collapse was handled heading into the fall of 2008.  The Fed was always "reactionary."

So what does this mean for the investment outlook?

The investment strategy for the second half of this year was to raise cash and prepare a shopping list of investments that would become attractive as the markets rolled over.  There would be a short window of purchase time before the Federal Reserve stepped back in.

Unfortunately, the Federal Reserve's early announcement has probably put a higher floor under where the most attractive assets will fall.  For example, my personal hope was that silver would fall under $15 during the next decline.  I have been raising cash to prepare to purchase heavily at that level.

With the Fed's announcement early, other investors now understand what is coming, and they most likely will step in early before the Fed declares war on the currency.

The point of this discussion is to stay focused.  When you live in a world where the government is so heavily involved in all aspects of the markets, and the Federal Reserve stands ready to print money and purchase any asset available, you need to understand their impact on the markets and plan for it.

The free market is long gone, but you still have to play the game that has been presented.