Through The Looking Glass

The world now assumes that the European debt crisis has passed, due to the stress tests released last Friday which tested nothing.

Unfortunately, in the real world, nothing has been solved.

In the financial markets the cost to borrow in the European banking system has been rising daily.  This indicates that tremendous stress still exists in the financial system as banks still do not trust each other.

Outside of the financial world on the streets of Greece we have another round of rioting this afternoon.  Truck drivers that carry fuel in the country have been on strike for days causing shortages at the pumps.  The government threatened to make arrests if the drivers did not go back to work.

Instead of going back to work, they took to the streets in protests.  The police have begun firing tear gas into the crowds to regain control over the situation. 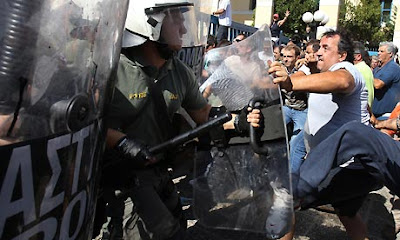 Meanwhile, here in the United States where such a thing could never happen, California governor Arnold Schwarzenegger has declared a fiscal state of emergency.

He has ordered 200,000 state employees to now be paid minimum wage, and many more to take 3 days unpaid leave a month.

They are currently faced with a $19 billion budget gap, and they will run out of money by October.

But who will buy this unlimited amount of Federal debt that continues to skyrocket upward?

"The FOMC’s extended period language may be increasing the probability of a Japanese-style outcome for the U.S., and on balance, the U.S. quantitative easing program offers the best tool to avoid such an outcome."

This is in concert with Bernanke's recent comments during testimony that he has "not run out of bullets."

The Federal Reserve's next round of Quantitative Easing (money printing) should provide the long awaited catalyst for our coming currency crisis.