This morning we received the jobs data for the month of August.  We lost 54,000 jobs in total, but the private sector added 67,000, which was very good news.

My only concern was where those private sector jobs came from......

The government added 115,000 jobs to the payroll using the birth/death model.  This is a number the government makes up, based on the projected number of employees hired by small businesses.

The notion of small business adding 115,000 jobs at this point in our economic depression is the equivalent of reading a nice story about unicorns and leprachauns.

The government's U6 unemployment rate, which includes those unemployed for so long that they have given up looking for work, moved up to 16.7%, which is on it's way to the 25% peak seen during our last Great Depression.

The following graph shows where our current employment recovery stands compared to previous recessions: (We are red line) 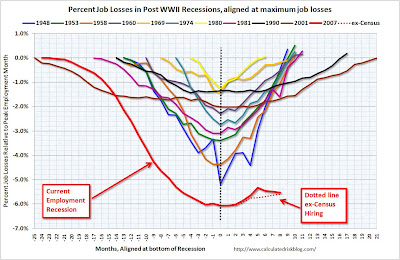 The stock market is rocketing higher on the news.