Very nice visual below that tracks consumer confidence (green line) with the stock market (blue line).  Our economy is based 70% on consumption, meaning it is based on Americans borrowing money to purchase goods.

In the summer of 2007 the American consumer died, declared bankruptcy, and threw up the white flag.  They were no longer capable of taking on additional debt to purchase goods.

However, even as the consumer confidence plunged to depression levels (and has stayed there since) the stock market bottomed in March of 2009 and has diverged from the confidence indicator.  You can see the green and blue lines separate below.
What happened?  Two very important things:

1.  The accounting rules were changed in March 2009 allowing banks to mark to myth.  They no longer were forced to take write downs on their toxic assets and mark them to market.

2.  The same month the Federal Reserve announced Quantitative Easing 1, which was the purchase of $1.75 trillion in mortgages and treasury bonds with printed dollars.

Since then, the market has been on a "sugar high" that the Fed hopes to sustain.  My guess is that the blue and green lines below are going to converge closer, and I do not feel it will be due to the consumer confidence (green line) rising. 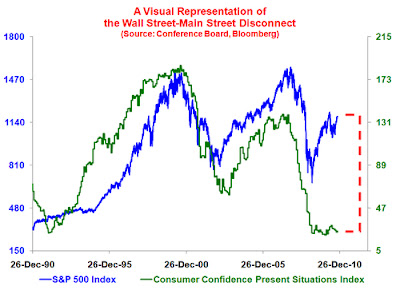