After jubilation around the country on election Tuesday and free money Wednesday (the QE2 announcement), on Friday it was back to normal economic data; the November jobs report.

The data showed the real unemployment rate (including those that have given up looking for work) held steady at 17%.  This number continues to hover just under 1930's depression levels.

In addition, the Department of Agriculture reported that as of August we had a new record for Americans collecting food stamps at 42.4 million.

"Food stamps have become a lifeline for workers who have lost their jobs, particularly among the growing shares of unemployed Americans who have also exhausted their unemployment benefits.  Lines at grocers at midnight on the first of the month have signaled that, in many cases those benefits aren't tiding families over and they run out before their next check kicks in."

This is exactly what the CEO of Wal-Mart reported a month ago when in an interview he said that they see grocery sales skyrocket at 12:00 AM on the first day of the month.  This is when food stamp cards turn back on. 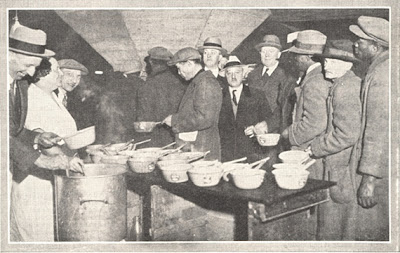 This program is the electronic version of bread lines that you saw in the black and white pictures during the great depression.  Even with the number of food stamps at record levels, they would be far higher without the addition of the Emergency Unemployment Benefits.

This program happens to be ending this month.  The department of labor has already sent a letter to Congress begging to have the program extended.  The letter included the following:

"With millions of Americans still looking for work, now is not the time to cut key safety net programs like Unemployment Insurance.  The Emergency Unemployment Compensation program is set to expire at the end of November.  If that happens, 2 million people will lose benefits in December and 6 million by the end of the year."

The food stamp and unemployment benefit programs are the two safety nets keeping our society in order.

Earlier in the week I wrote Quantitative Easing Explained which shows how the program works.  Today I posted the chart of Year to Date Performance of asset classes around the world.

One of the biggest beneficiaries of the free money pouring into the system has been agriculture which has seen prices skyrocket over the past few months.  This has not yet been felt in the grocery store because there is a lag time in this process.

When these banks receive the $600 billion in free money, they have the ability to speculate in agriculture to ride the wave up taking prices higher along the way.  They will collect massive trading profits and add to their bonuses which are anticipated to come in at record levels again in 2010. (While bank shares have performed terribly recently)

The average benefit size per person on food stamps per month is $133.90 and per household it is $287.82.  This is already not enough to cover expenses, which can be seen by the lines at 12:00 AM on the first of the month.

Fortunately, most of these starving Americans cannot connect the dots between Quantitative Easing, bankers speculating, inflation, and record bonuses.

Unfortunately I can, and while the process benefits my portfolio, it breaks my heart to watch it take place.

On a side note, Bank of America recently reported that it made a profit on every single trading day of last quarter.  Every.  Single.  Day.  For an average of over $50 million per day.  They made this profit trading/speculating/gambling with tax payer money.  They collect when the trades go well, we pay when they go bad.

Things could get very disorderly if and when Americans finally understand what is taking place.