The Case Shiller Home Price Index was released this morning for the month of September, which is a 3 month average for July, August, and September.

The index showed a broad base decline across the board, confirming every piece of data recently released that the decline in housing has resumed and it is accelerating.

The only city to show a price increase was Washington DC, America's last bubble city funded by massive federal employment checks, and the rise was minimal.

The following chart shows prices rolling back over and preparing for full collapse as the growing shadow inventory begins to enter the market: 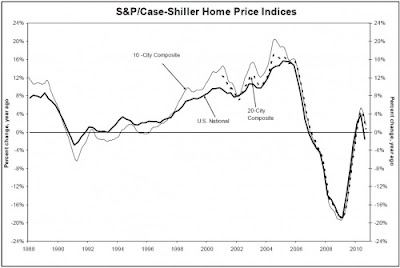