Investor Sentiment Vs. The Real World

Retail investor sentiment for the stock market hit a 3 year high this week as over 70% of investors are bullish on the stock market over the next 6 months.  The exuberance can be seen rocketing higher in the chart below. 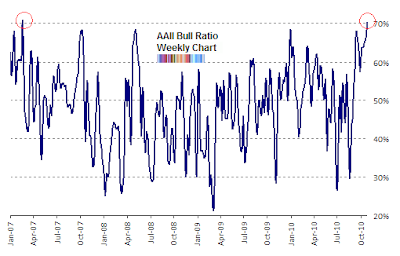 Executives and employees of the companies that the retail investors are purchasing stock in were not quite as exuberant.  Last week we saw a multi-month high in insider selling at $662 million.  The ratio of sellers to buyers was a massive 423 to 1.  The executives that live in the real world understand exactly what is happening, and they are jumping ship as fast as possible.

Some other people living in the real world are the Americans that are fast approaching the end of their 99 weeks of unemployment pay.  In anticipation of this event, Indiana News reported yesterday that unemployment offices will now have armed security guards on site in anticipation of violence. 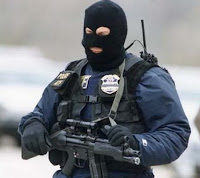 America has thus far been very complacent with the economic depression due to the fact that most Americans are not currently paying their mortgage and living rent free as mortgage lenders currently take 484 days on average to begin the foreclosure process.

Many of those living rent free have been collecting unemployment checks to pay for other needed goods.  The reduced cost of living and checks coming in the mail for no work have most likely been a boost to their previous lifestyle.

However, once the 99 weeks expire and the checks stop, the violence will begin as Americans become angry and hungry.  Look for either an extension to unemployment benefits after the election, or a much larger militia currently seen at the unemployment offices of Indiana and around the country.