Up Next: Portugal And Spain

The focus of this site is to study the past in great detail, observe what is taking place around us in real time, then process that information to get an understanding and form a discussion about what is coming in the future.  To stay focused on the future tense.

With Greece and Ireland now taking home their cozy bail out money for the holidays, the focus will be on the next two dominoes in line:  Portugal and Spain. 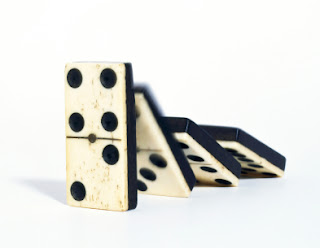 Before we get there let's take a look at the size and scope of the Greek and Irish bail out to get an idea of the current blueprint being used.

In 2009 the GDP (Gross Domestic Product, which is the measure of the total size of an economy) for Greece was $331 billion.  Ireland was $221 billion.

All these countries we are discussing run an annual deficit, which means they have to borrow from the market in order for their government to pay their bills every year.  Their income (taxes) are less than their expenses.

It appears the blueprint for the EU bailout committee has been to provide the countries with 3 times their annual deficit.  This means they will give them enough money to cover their annual shortfall for the next 3 years.  Their hope is that this will calm the market and give them time to put together some sort of strategy to fix the problem. (Which they won't, but that is for another discussion)

Using this strategy, the final total for the Greek and Irish bailouts have come in at 90 billion euros, or $122 billion.

With this blueprint in mind we can now focus on the coming cost to bail out Portugal and Spain.

Portugal is anticipated to run very similar in size to Greece and Ireland; their GDP is close in size at $233 billion.  Their bailout will follow Greece's model, however, because it will be needed for their collapsing economy and unemployment.  Ireland's was needed to cover bank losses.

Everything good so far.  Just another speed bump along the way, right?  Right, but here is where it gets interesting:

Spain is not similar in size to these 3 countries: it is a MONSTER.  Its GDP is $1.468 trillion, twice the size of the other 3 combined.

In order to cover their annual deficit for the next 3 years and follow the current blueprint the total cost will be:  450 billion euros or $600 billion!

This will take an enormous amount of political will to force a bail out of this size through using the current process in place.  (Remember, other countries in the EU have to band together to pay the bill, along with the IMF which is composed of funds from many countries outside the EU such as the United States)

This is why these events are so important to be thinking about now, and you have to track the political atmosphere daily to determine how your portfolio will be affected from either outcome.

Stay tuned, I will be tracking these events in real time as we progress forward.