What If The Banks Failed?

As the IMF prepares to send in the Trojan Horse this evening to "save" Ireland banks, people are starting to wonder what would happen if some banks around the world were actually forced to take some losses and not give out record tax payer paid bonuses this year?

That answer can be clearly seen in the example of Iceland, a country whose debts overwhelmed them during the financial crisis but decided not to bail out their banks.

In a Bloomberg interview this week their president discussed some of the "horror" of life in his country where his people do not send their hard earned taxes to banks to pay out record bonuses.  Brace yourself:

Iceland’s President Olafur Grimsson said his country is better off than Ireland thanks to the government’s decision to allow the banks to fail two years ago and because the krona could be devalued.

“The difference is that in Iceland we allowed the banks to fail,” Grimsson said in an interview with Bloomberg Television’s Mark Barton today. “These were private banks and we didn’t pump money into them in order to keep them going; the state did not shoulder the responsibility of the failed private banks.”

Iceland’s banks, which still owe creditors about $85 billion, were split to create domestic units needed to keep the financial system running, while foreign liabilities remained within the failed lenders.

As a consequence, “Iceland is faring much better than anybody expected,” Grimsson said.

“How far can we ask ordinary people -- farmers and fishermen and teachers and doctors and nurses -- to shoulder the responsibility of failed private banks,” said Grimsson

Wait a minute?  I don't understand?

Iceland let their banks take losses?  They split their banking units and allowed the bad debt to be liquidated?  And......

There is still a country there?  It did not explode as we have been told will happen here in America?

How unfortunate for their people that they are not taxed to pay for a Goldman Sacs and Bank Of America to give out exorbitant pay.

Fortunately, there will be no more Iceland "tragedies" moving forward as the IMF (a group of bankers) is sending in the Trojan Horse to Ireland (to save the bankers) as we speak. 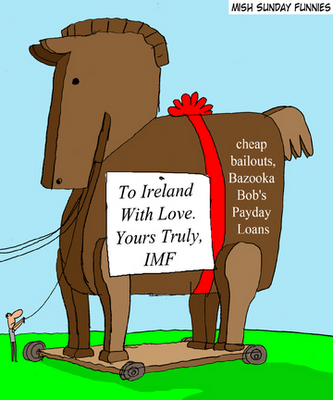