As I wrote about a weeks ago, before the Ireland bail out was confirmed, there would be no rioting from the citizens of their country until AFTER the government decided to save the banks, I mean, "people of Ireland."  And sure enough, since the announcement the people have taken to the streets to riot to show their appreciation of the government's "generosity." 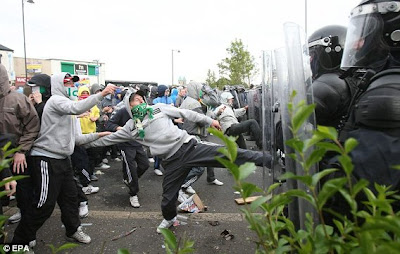 Now they are strapped with years and years of additional debt and interest payments that will be paid for by newly imposed austerity packages from the ECB and IMF. (Global private central banks)

The sacrifices of the every day worker in Ireland will go toward another year of record bonuses paid out to the banks who will take no losses on the sovereign debt they purchased.

In the meantime, the United States has announced tax cuts across the board for the coming fiscal year in order to support growth.  I commend this strategy as an effective tool to promote business hiring and growth.

I was then excited to look down the budget line items to find the spending cuts they will make in the other areas of our enormous and grotesquely bloated budget.  And I found......

No spending cuts will be made to offset the tax cuts.

Our deficit will continue to be paid for by Ben Bernanke who has already announced his plan to finance 75% of our spending through the first half of the year with QE 2.  QE 3 will follow soon after during the second half and will probably finance 100% of the remaining deficit.

Americans sit passively by as the country is brought closer to complete ruin and collapse.  I am paying close attention to the actions overseas by both politicians and the citizens as it provides a sneak preview of what is soon in store for America.

For a glimpse into this future, the following is an interview with a common Irish citizen who fully understands what is taking place before him.... (warning: explicit)